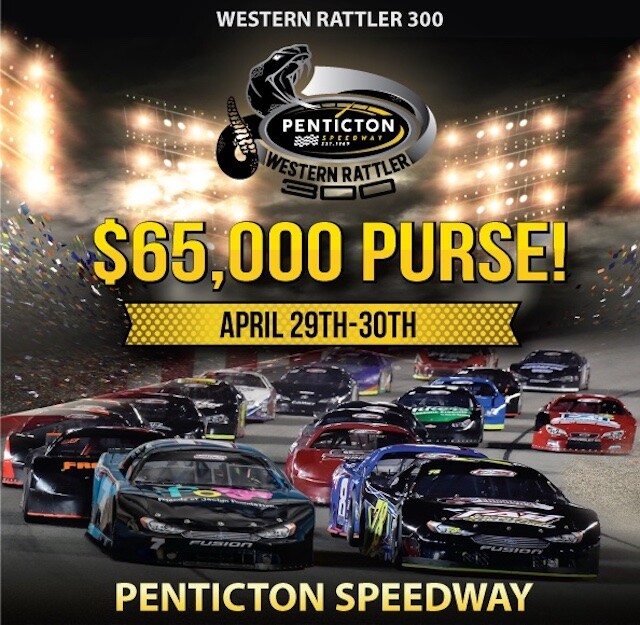 The newly renovated Penticton Speedway is gearing up for what speedway officials predict will be one of its biggest events ever.

A weekend of racing, with a total of $65,000 in prize money—the largest spring short-track race purse in Western Canada for Late Model and Street Stock racing cars—will take place April 29 and 30. The featured race will be the Western Rattler 300, set for the evening of April 30.

“This will be our first event back with a full crowd,” said speedway co-owner Trevor Seibert, who along with his cousin Ingo Seibert, partners Lee Howarth and Bryan Weavers bought the track last year and have completed a number of renovations to the track, the grandstands, the parking areas and rest of the facility.

A full house of 4,000 spectators is expected over the race weekend and the races will also be broadcast on Shaw Cable, Rev TV and on Sirius XM.

The Western Rattler 300 weekend is the first of several big racing events scheduled at the Penticton Speedway in the coming months.

The Avion Motorsports RS1 Series will visit Penticton Speedway July 23 and Aug. 20. In May, the speedway will host monster trucks for two nights, May 14 and 15 and the Winged Spirit Car series will hit the track in August.

Trevor Seibert, a veteran of auto racing as a former driver, team and series owner and the designer, builder and co-owner of Area 27, a major road course in Oliver, says his desire is to make the Penticton Speedway the top short-track speedway in the country.

“Historically, it has done very well in Penticton. So we are really trying to cater to new fans, to get as many new people out as possible,” he says.

After pandemic restrictions, he says he is happy to welcome back racing fans.

Fans will notice several big changes at the speedway, which was built in 1969. Half the tack has been rebuilt, there are new walls and new lighting and new larger grandstands.

“The speedway really needed renovation,” says Seibert. “The old grandstand is gone and the wall and catch-fencing are all new.”

On the weekend there will be a licensed beer garden and four or five food trucks.

In addition to the speedway, Seibert also owns the Avion Motorsports RS1 series, which uses standardized cars, designed, built and maintained by Avion Motorsports. He says with a level playing field when it comes to the cars, the races come down to the individual skill of the drivers. It is one of the quickest-growing racing series in the country.

In addition to the showcase Western Rattler 300, the upcoming weekend of racing will include the 100-lap Venom 100 for Street Stock cars and the Baker’s Dozen race for Late Model cars on the Friday night and the 100-lap Western Rattler 100 on the Saturday before the big race.

For more information check out the Penticton Speedway’s website at pentictonspeedway.com.