Despite the current challenging economic times, the demand for roofing and architectural sheet metal has never been higher.

And Kelowna’s Laing Roofing is seeing that first-hand.

The 35-year-old family-owned and operated company’s growth in the last few years has been fuelled, in large part, by Kelowna’s unprecedented rate of development. And while some of the growth in local construction can be credited to firms based in the Lower Mainland, local companies like Laing have had to radically adjust from being a thriving medium-sized business to a formidable large-scale company in a very short amount of time.

The company also has a Vernon office and some of the high-profile projects it has worked on in that area include the Sparkling Hill resort, the B.C. Hydro operations centre, Vernon Jubilee Hospital, Kal Tire Place, the School District 22 administration building and the Okanagan Regional Library building inVernon.

The company now has more than 120 employees and continues to grow.

Additionally, as shown by local development companies like Mission Group, Troika and Stober Group, the Kelowna construction industry is also pushing the envelop on what it means to develop property in the city. Those visions rely on companies like Laing to help make their large development projects reach levels of quality previously found only in larger centres, such as Vancouver, Calgary and Edmonton.

According to Macauley, demand for high-quality workmanship is also at an all-time high. 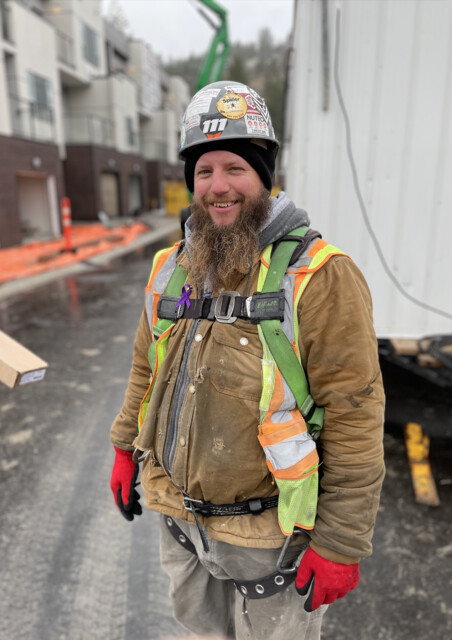 Laing has also been instrumental in that area too, with the business moving to include more formally trained workers in the local industry to meet the demand for the higher standard of building quality and education of workers not seen in the region in the past.

Laing currently sends its workers to the Lower Mainland to be formally trained by RCABC but hopes to one day have roofing and architectural sheet metal programs offered in Kelowna.

In recent years, the province’s placed more emphasis on trades and trades training in the region by funding more programs and student places at Okanagan College campuses, including at the state of the art trades training centre on the college’s KLO Road campus in Kelowna. Okanagan College is now the second biggest trainer of trades students in the province after BCIT in Burnaby.

Work B.C. estimates there’ll be approximately 860,000 jobs in the trades that will need to be filled across the province over the next eight years and Laing is doing its part to help meet some of that need with its innovative recruitment program.

As an example of the growth, the company has seen over the last 18 months, despite the pandemic, its newly created service division, designed to help meet the demand of local commercial property managers and owners throughout the valley, has tripled in size.

The division’s grown from three employees and two fleet vehicles to 15 employees and eight fleet vehicles in 18 months. The division provides roofing services to numerous commercial property owners, including the City of Kelowna, the Kelowna International Airport (YLW), and the Regional Districts of the North and Central Okanagan.

With one of the widest weather spectrums in the country, Laing roofers are kept busy year-round. But it’s not just new construction that keeps them hopping.

A large increase in roof repairs, maintenance, replacement and emergency preparedness measures has also contributed to the growth in the local roofing sector.

For more information about Laing Roofing, visit its website here.

Photo: Contributed
The Sparkling Hill Resort near Vernon is one of the large projects Laing Roofing has worked on.