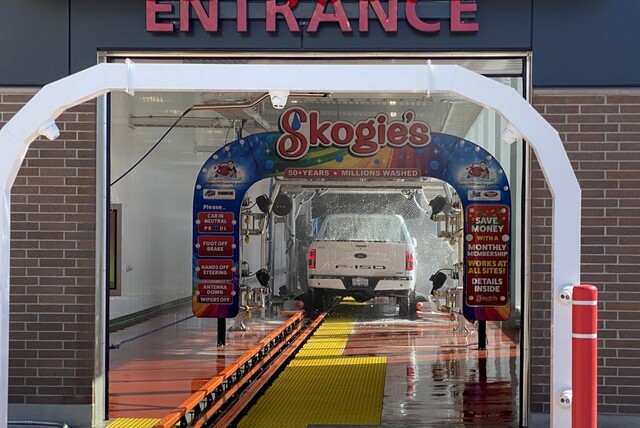 It’s been a big year for Skogie’s Car Washes, and it will send 2021 out in style with another fundraising drive to help the community.

Skogie’s is donating a portion of all washes between Dec. 1 and Christmas Day to Central Okanagan Food Bank. That follows the Movember fundraiser it did last month, which raised $1,000, as well as the $50,000 donation it made to Okanagan College in July.

In other words, life is good for the Skoglund family these days. So they are making sure they return the favour to the community that has supported them for the last five decades.

“What we’re trying to do on an ongoing, regular basis is give money back to the community,” co-owner Chris Skoglund says.

This isn’t the first time Skogie’s has helped out during the holidays; last year it provided $10,000 to local food banks.

Skogie’s has four locations in the Okanagan, including three in Kelowna—Soft Touch Clement Wash at Clement and Ethel, the original Auto Spa at Highway 97 and Underhill Street, and Willow Park Touchless Car Wash in Rutland. It also owns Vernon’s Express Tunnel Wash on Anderson Way.

The Soft Touch Clement Wash is proving mighty popular among Skogie’s customers, as the latest generation of vehicle washing technology provides a softer wash that is extremely gentle on exteriors. The tunnel is 20 feet longer than normal, and its brushes feature pads that cover more area than a regular brush.

Another bonus? It’s as quiet as a church mouse.

“You can easily talk on your phone in the car wash as you go through, unlike most car washes,” Skoglund says. “It’s really quiet.”

The roads are covered in slush, gravel and dirt these days, so a trip to Skogie’s will get your vehicle looking good for the holidays.

More importantly, it will help feed those in need.