Taste of Italy in Okanagan 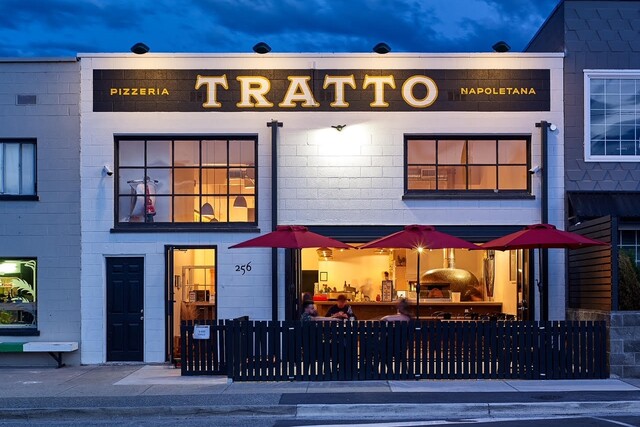 Pizzeria Tratto was an immediate hit in downtown Penticton when it opened two years ago. It is incredible to think that it had only four months of business before the pandemic hit, slightly throwing off the groove it immediately struck with both visitors and the people of Penticton.

“It was maybe a little different for locals to have a restaurant focused on not just one cuisine, but one dish from one cuisine from one specific region in Italy,” partner Christopher Royal says. “Our pizza is based in Naples tradition, the birthplace of pizza. Actually, my business partners’ family came from a street in Naples called Via Tevere, which is also the name of their pizzeria in Vancouver.”

If you’ve heard of Via Tevere, that’s because it was honoured with ‘Best Pizza in Canada’ earlier this year. 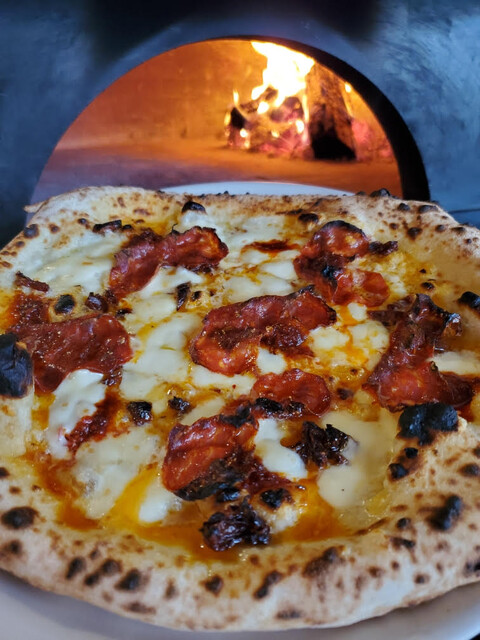 “Half of our menu here at Tratto stays rooted in that tradition, while the other half explores a contemporary slant,” Royal says. It’s an idea that is reflected further by the look of the restaurant. The whole kitchen, including its impressive wood-fired Neapolitan oven, is set right in the middle of the restaurant’s modern design.

With that open kitchen, patrons of Pizzeria Tratto can watch the dough being stretched, topped and then cooked. The cook time is only about 90 seconds, though, which is all it takes when the domed oven hovers around 900 F.

“I like to tell people we’re slow food done fast,” Royal says. “Everything else we do leading up to making the pizza takes time. For example, we ferment our dough for two days before use, which gives our dough its unique flavour.”

The time and effort it takes to cook a pizza in 90 seconds goes way deeper than that, though. Long before the dough is ready, great ingredients need to be sourced. The “00” flour used at the restaurant actually comes from mills in Naples, Italy, but Royal will be the first to point out that the restaurant is also fiercely proud and supportive of local farmers and ingredients. Tratto sources its summer produce directly from South Okanagan farmers, and the cheese for the pizza is made in Salmon Arm by Tanto Latte.

The connection to the amazing flavours of the Okanagan isn’t just on the pizza at Tratto; you can also find it in your glass.

“Our wine list is anchored in southern Italian wine,” Royal says, “but there is also a carefully curated B.C. section. Our wine list rotates monthly, and our beer taps, which are B.C. exclusive, rotate weekly. Also, there’s a wonderful cidery scene developing in the Okanagan, plus a burgeoning aperitif crowd, so we’ve developed that part of our menu too.”

Pizzeria Tratto is located at 256 Westminster Ave. W. and has big plans for the new year, most notably the following special weekly features:

• Bottle Shock (Monday and Tuesday) — When you come in and buy a bottle of wine, you get a free pizza as well. Nothing simpler than that.

• Full Sleeve (Wednesday) — It is exactly what you need in the middle of the week. Two sleeves of local beer and a classic margherita pizza for only $19 every Wednesday. There really isn’t a better way to try some of the latest brews from Penticton and other parts of B.C. Speaking of deals, all sleeves at Tratto are regularly just $5, so if it’s been a rough first three days of the week, a second beer doesn’t hurt your bank account either. (If the margherita pizza isn’t your style you can upgrade it to one of the other amazing choices and you’ll still get an amazing deal.) 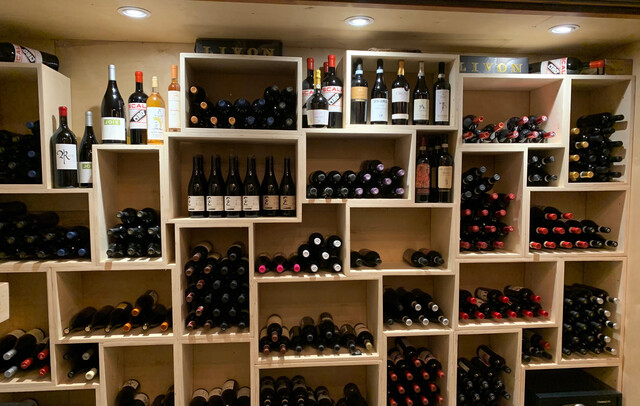 • Cocktail Saturdays — Starting soon, Shawn Dalton of Marrow Vermouth will be turning Tratto into a hopping cocktail bar on Saturday nights from 8:30 to close. Full wine list and beer taps will also be available along with some late-night snacks from chef Steve Ramey.

• Family Dinners (Sunday) — Speaking of Ramey, did you know that a pizza oven can cook things other than just pizza? Ramey does. Starting Jan. 9, with Mireille Sauvé of Wine Umbrella and Dames D’Escoffiers, Pizzeria Tratto is pairing up with local wineries, breweries and cider makers to do some fun and exclusive events. Tickets are limited to 20 seats and will be available through the website.

“We will always love pizza, but it’s a chance for our kitchen to do something different with the oven,” Royal says. “Nine hundred Fahrenheit is great for the perfect pizza, but we can also let that wood fire die down overnight and roast things low and slow.”

Eventually, Royal wants the Sunday night dinners to be a regular event, where they plan out the menu over the course of the week and run with it on Sunday night.

“The dream is to do that every Sunday in the off-season,” he says. “We want people to be able to come to us for Family Dinner every week.”

More information about Pizzeria Tratto, which is available for work holiday parties now or in the new year, can be found on its website here.