SilverStar: The soul of skiing 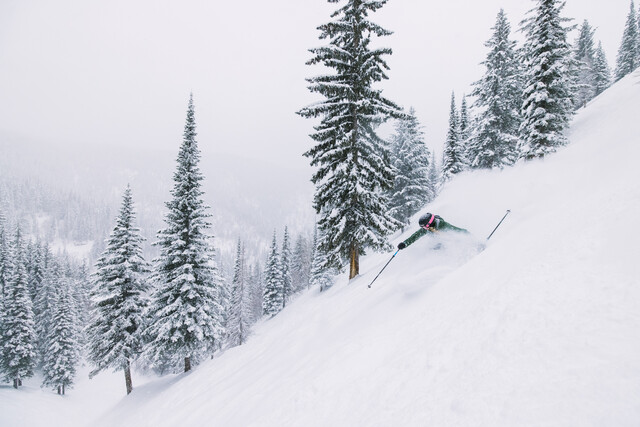 Stumbling into something amazing that you never imagined existed. An experience everyone has the first time they ski SilverStar.

Back when I was discovering that I wanted mountains always to be in my life, some friends and I decided to go play in some big ones by driving a pickup from New Mexico to Alaska. It was already late when we set out, winter was curling the days at the edges, and the truck had just two seats for the three of us, so someone had to ride for thousands of miles wrapped in a sleeping bag in the bed in the back. We were dirtbags, and we never got close to our goal. We discovered the mountains of British Columbia, instead, and that changed everything.

Fast forward a decade or so and that excitement for the north has only grown. I have skiing to thank for that, and for years, winter never felt complete without lumbering over the border with boards to explore someplace new. Canada’s coolest province counts 10 mountain ranges and 13 ski resorts between its ample borders, and so the options for a good ski holiday are endless. Yet even among such company, a place called SilverStar stands out.

I hadn’t heard of SilverStar until one night at a party in Seattle, where the resort found its way to me almost as a whisper, except the DJ was super loud so it was more like a shout. “Trust me,” my friend John yelled over “Born this Way,” an IPA warming in his hand. “You’ll love it.”

SilverStar sits in the 10,000-foot Monashee range north of Kelowna, a city of about 130,000 people who live out their days next to vineyards, parks, and lakes that dot Canada’s pleasing Okanagan Valley. If Whistler is the Great White North’s Gstaad, SilverStar is something less famous but more awesome, maybe its Lenk or Adelboden, a sprawling network of ski slopes, cross-country ski trails, fat-bike paths, and snowshoeing routes that race across a roaring landscape full of discovery without the crowds. Make no mistake: These mountains are made for skiers. Storms take no prisoners with 23 feet of light, dry snow dumped across almost 3,300 skiable acres. You can cook your quads on 2,500-vertical-foot runs or take it mellow on a 5-mile cruiser. There’s a front side and a backside, which has enough double-blacks that folks call it hairy.

As cool as it would be, SilverStar isn’t some secret Shangri-La that no one knows about—Google can point the way. And, in fact, at more than six decades old, it is one of Canada’s longest running resorts. Even so, it still felt very undiscovered when my wife and I went to check it out. Short on time but long on energy, we flew into Kelowna and pointed the wheels north for the 40-mile drive to the resort, even though we could have easily driven from our home in the Pacific Northwest. The broad Okanagan Lake gathered to our left as we passed places like Pixie Beach and Lake Country. Soon the road cocked skyward and the engine whined as we climbed the last of a vertical mile up to the resort. Instantly, we knew we’d discovered a gem.

Bright buildings painted in rich blues and pumpkin-carriage orange rose around a village of shops and spas with a gondola drifting overhead. Unlike the heavy timbered clichés you find at so many resorts around the world, SilverStar had more of a frontier-meets-Victorian vibe, with witches hat cupolas and scalloped siding to enliven condos, hotels, and shops. A boardwalk ran past happening hotspots like the Red Antler, where we’d catch live music and an elk burger. We could ski right out of the village—no need to ride a lift first. 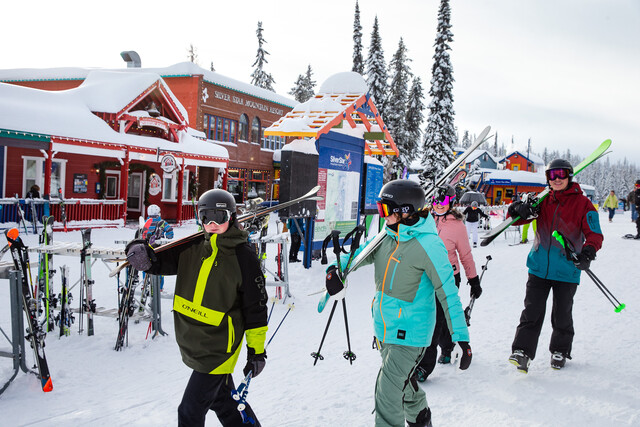 We got a room at the Silver Creek Lodge, one of nine on-mountain places to stay, which had a kitchen and fireplace, and then wandered over to Pizza Gratta where we laid out a plan over delicious sourdough crust pizza. The more than 130 marked ski runs were just the tip of the resort. At our fingertips lay more than 65 miles of cross-country ski paths, the largest network of trails groomed daily in all of Canada. We could ride the gondola and ski lifts to access those trails as well, a novelty I hadn’t discovered since I’d been in Europe. (Come summer, those trails turn into nearly 80 miles of bike paths—the country’s second most for a resort). A network of about 10 miles of fat-bike trails spiralled out from a skating pond, too. A pass called My1Pass would get us access to it all. With some three-day lift tickets going for as low as $84—$61 to us Yanks—we felt like we’d struck silver. It was only later that I learned that SilverStar counts among one of the most affordable resorts on the continent. It was certainly the best value of any place I’d ever been in B.C.

We spent the next few days doing our best to carry out our plan, but those plans were almost immediately hijacked by new discoveries that led to other plans. We skied hard, on steep shots like Gowabunga, and raced down Caliper Ridge. We blasted through the trees and traversed out to some stashes that no one else had claimed. But we took time to chill, relatively speaking, too. We skate-skied through the pines and stopped at warming huts to eat Dutch pastries, and we took a sleigh ride out to Wild Horseman’s—a wagon-wheels-in-the-rafters kind of joint—where I gorged on barbecue. We skied up to a bowling alley (a first!) but we didn’t go in. There’s a lot we didn’t do, actually. We didn’t do yoga or go snowmobiling or catch a hockey game, either. We didn’t go snowshoeing or even ice skate on that pond. Next time.

Instead we just stayed put. As I learned on that dirtbag drive to Alaska, the best discoveries often happen that way.

Sleep: Almost anywhere in the village is ideal, so you can’t really go wrong. The Vance Creek Hotel boasts modern rooms that sit right on the boardwalk.

Eat: The Den has poutine like you can only get in Canada. If you have a hankering for something not so Canadian, The Bulldog Grand Cafe does awesome Indonesian food.

Après: Head to The Red Antler for live music. Drink a flight of beer at The Final Run Bar, which is next to the bowling alley, which is really what that “walk mode” on your ski boots was designed for.

Don’t Miss: Riding a gondola with your cross-country skis is unlike anything this side of Switzerland. A great way to mix up your days. 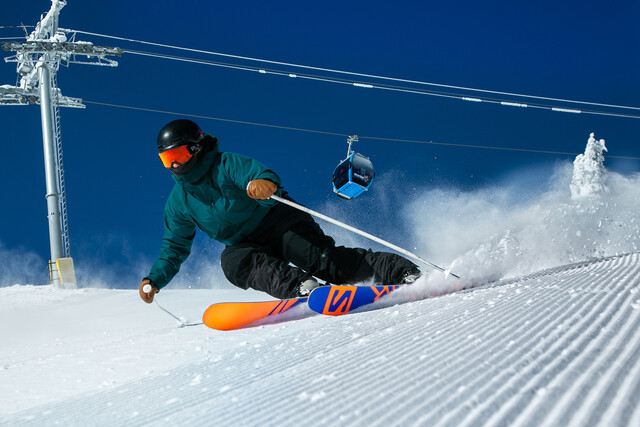