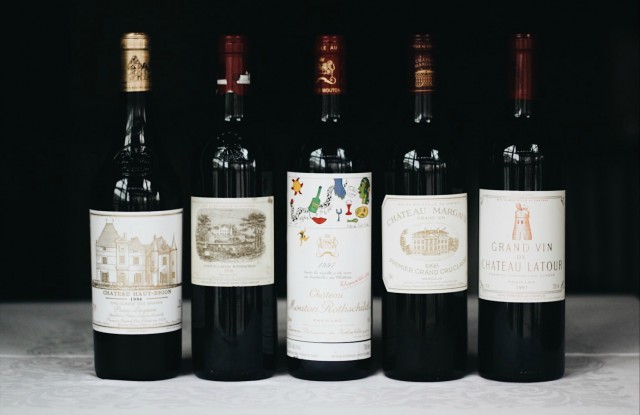 Later this summer, a Kelowna restaurant will host a dinner unlike any the city has ever seen.

Only eight people will attend, but those eight attendees will be given an opportunity many wine enthusiasts can only dream of.

La Bussola’s First Growth Dinner will provide a rare opportunity for those people to taste all five of the famed First Growth wines in one night.

As Stephen Hart, the sommelier hosting the dinner, explains, the five first growth wines topped a classification list created at the request of Emperor Napoleon in 1855.

They gained widespread notoriety after appearing in a display of Bordeaux wines at the Universal Exhibition in Paris that year, and have since become some of the most sought-after Bordeaux in the world.

More than a century of demand has pushed their prices to dizzying heights, and the opportunity to taste one of the first growth wines is a rare treat.

Sampling all five in the same night, Hart says, is for many a once-in-a-lifetime experience.

“Nobody says ‘hey, let’s open up five first-growth wines.’ That’s like saying ‘today we’re going to drive a Ferrari, Lamborghini, Aston Martin, Bentley and Maserati all in one day,’” he says. “This is going to be a very unique event.”

Only eight seats at La Bussola’s exclusive event are available, with tickets selling for $1,500 each.

The night will see the entire restaurant given over the the private dinner, featuring exquisite food prepared by chef and owner Lauretta Coccaro, paired with the first growth wines.

Hart, already a certified sommelier and Bordeaux Master Level candidate, has been training for close to six months to prepare for the evening.

He will take guests through tasting each of the celebrated wines in “an enriching, educational and immersive wine-tasting experience,” explaining both the history and significance of each vintage.

The five vintages La Bussola will serve at the Aug. 28 dinner will be:

While the dinner promises to be a thrill for the eight lucky attendees, Luigi Coccaro says it’s also making an important statement about fine dining in Kelowna.

Coccaro is the general manager and wine director at La Bussola, and has his WEST diploma in wine and spirits, a designation he shares with less than 10,000 people in the world.

“Normally it would be places like Toronto, New York, Toyko and Beijing hosting this kind of dinner, so our first growth dinner says something about the culinary scene in Kelowna, that we are moving up and becoming more serious,” Coccaro says.

Coccaro points out that his father, Francesco Coccaro, founded La Bussola in 1974. It was the first Italian restaurant in Kelowna, and the fine dining establishment quickly became the largest wine destination in the city.

Francesco has been buying fine wines since the beginning, and La Bussola now boasts a collection of more than 600 wines often garnering awards from publications like Wine Spectator.

The collection is the largest between Vancouver and Calgary, and the retired Francesco still actively helps guide the restaurant’s wine program.

Coccaro says it was his father’s foresight that today gives him the opportunity to uncork all five first growth wines in a single dinner.

For more information on La Bussola, or the first growth dinner, visit www.labussolarestaurant.com.