Assumptions are joining the dots, but not always correctly

The danger of assumptions 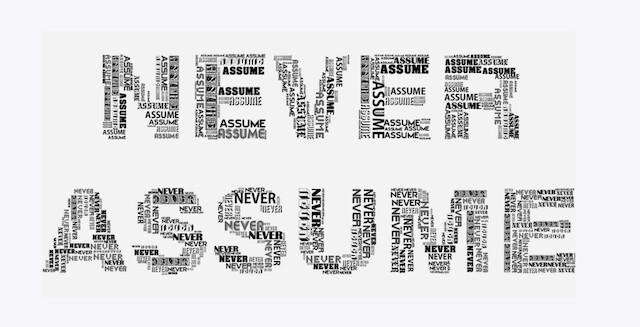 Have you ever been in a situation where a stranger made a wrong assumption about you?

I experienced that twice in a 12-hour period of time recently.

As I signed myself and a friend into the pool at the hotel we were staying at, the man taking the information assumed I was my friend Meaghan’s mother. Yes, I’m old enough to have given birth to her, but I didn’t.

Then, the next morning, a similar thing happened. I stepped into the elevator with my coffee in hand at the same time as a man I didn’t know. We were soon joined by a third person who struck up a conversation that made it clear he thought we were a couple.

Later, when we were floating in the ocean, my friend saw something bobbing in front of her and assumed it was a log. It wasn’t until someone asked us if we’d seen the turtles that she realized it wasn’t driftwood that she had spotted. Her assumption stopped her from looking closer at the object in the water.

Fortunately, we didn’t miss our chance to see those amazing creatures. They were still swimming around us once we realized what they were.

Assumption: something you accept as true without question or proof. —Cambridge Dictionary

Everybody makes assumptions, but they’re sneaky. You probably don’t even notice you’re doing it. If a car speeds past you, you may assume the driver’s an idiot. But maybe they’re rushing someone to the hospital.

The human brain likes to make sense of the world. Give it a few dots and it will join them together. It isn’t really concerned whether the conclusion it draws is true or not.

You may think you understand why a person made a specific decision, took a particular course of action, or uttered certain words, but do you really?

Assumptions are typically based on your own past experiences and desires, rather than facts and evidence. The problem with assumptions is you use them to make judgements and decisions.

Believing you won’t be considered for a job you want might stop you from applying for it. Thinking a co-worker doesn’t like you can affect how you feel about going to work. Assuming your romantic partner isn’t in love with you anymore has the potential to make you pull away.

As with any personal development, awareness is the first step to transformation.

The next time you notice you’ve arrived at a conclusion about someone or something, stop and ask yourself, “How do I know that? Do I have evidence, or am I indulging in an assumption?”

By stopping to do some fact-checking first, you can avoid falling into the assumption trap and avoid potential problems and drama.

After all, aren’t we all craving a peaceful life?