Age really can just be a number for some people 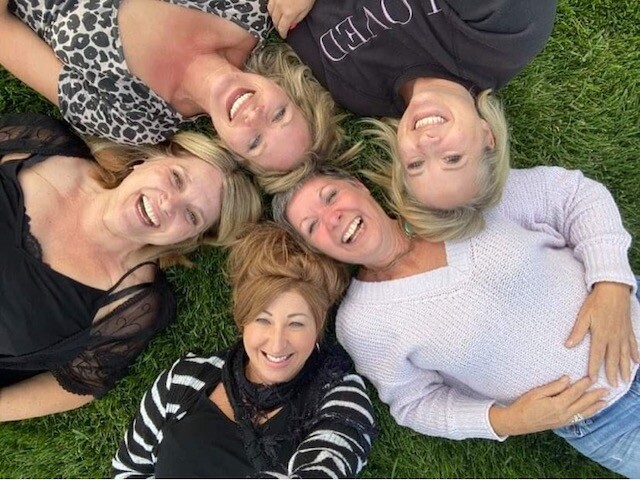 I’d like to start by asking you to look at the photo that accompanies this week’s column.

Would it surprise you to know that the ages of these women span more than two decades?

I could have given birth to two of them, without even being a teenage mom, and I’m not the oldest one in the photo. There are two women in their early 40s, one in her 50s and two in their 60s.

The thing that struck me as I looked at this picture from a recent girl’s trip to Alberta, is how irrelevant age is.

When you’re young, a few years makes a huge difference. By the time you reach adulthood, you may not know how old your friends are. You may even struggle to remember how old you are.

Sometimes, the age difference that mattered when you were a teenager, continues to live in your head when it no longer makes any difference.

This was the case with my in-laws. They always talked about how much older Bill was than Beryl. When I did a calculation, I realized the age difference they talked about was less than three years.

That was similar to the age difference between their son and me. I’d tease him about being my toy boy, but I considered the 26-month difference to be insignificant.

Why the difference in perspective?

Bill and Beryl were 18 and 15 when they met. Three years is quite a difference at that age.

I’d had a five-year relationship was with someone 18 years my senior. By comparison, 26 months was nothing. That doesn’t mean I wasn’t aware of the age difference or that it didn’t matter.

Almost all my former husband’s friends were younger than me. I was keenly aware that I always hit the milestone birthdays first. I was also the old one amongst the parents of my kids’ friends. They assumed I was their age and I did nothing to dissuade them.

I think I carried this age awareness because I was also carrying an ancient idea of what it means to get old.

My parents and grandparents were like many people who settled into retirement as a precursor to death. They accepted aches, pains, slower brain function and less energy as a natural part of getting older. If that’s what it meant to age, I didn’t want anything to do with it. As a result, I was reminded of my age everywhere I looked.

It’s only relatively recently that I’ve stopped focusing on birth years. Perhaps that’s because many of my friends are in their 40s, but I live in a community of seniors. The juxtaposition has allowed me to look at aging differently.

I have the opportunity to spend time immersed in younger energy and also observe the process of moving into more senior years. Being younger doesn’t mean you aren’t as wise. Being older doesn’t mean you have to decline physically or mentally. The latter thought isn’t just wishful thinking. Have you encountered the term “super-ager?”

The Memory and Aging Center at the University of California San Francisco is conducting a longitudinal study of the elderly. There’s one man in his late 80s who’s caught their attention. His brain scans aren’t pretty. They suggest age-related deterioration as well as a series of mini strokes. If you only examined the images, you’d probably think his memory and thinking skills were weakening. That’s far from the truth. His brain function and cognitive abilities are high and haven’t changed in years.

Joel Kramer, the director of the neuropsychology program couldn’t understand why the aging of this man’s brain wasn’t reflected in his abilities to function. Other members of the study whose scans were similar to his, were showing a definite decline.

When Kramer met the man in question, he was struck by how dynamic he was. His outlook on life was incredibly sunny and optimistic. He kept himself busy with numerous projects, was closely connected to his family and volunteered in the community. He was quick to share how grateful he was for everything he had. He chose to embrace life and not sweat the small stuff. He seemed to be living his golden years to their fullest.

This isn’t an isolated case. I recently watched an interview with an English octogenarian who took three buses to get to the charity shop where he volunteered.

I’ve also met seniors who help in assisted living and nursing homes where they’re older than the people they’re helping.

These super-agers are inspiring researchers like Kramer. They want to determine what sets these people apart from typical agers.

In today’s society, when octogenarians, nonagenarians and centenarians are more and more common, I think it’s important to recognize that aging doesn’t have to mean getting old in the traditional sense. You can live your whole life being vibrant and active if you want to.

It’s true that some people are more blessed genetically, but you can make the most of any hand you’ve been dealt. You simply have to choose to do that. It isn’t always easy, but I believe it is worth the effort and energy.

The remarkable man in the SCSF study is a prime example of someone who practices happiness. That lifestyle is available to anybody, regardless of their financial means, or genetic circumstances.

I hope when my friends and I are in our 60s, 70s, and 80s our pictures still reflect the agelessness that exists between us.

Welcome to the world of the super-agers.