Over the past 1 ½ years, weddings have looked a bit different than they previously did.

Large parties with crowded dance floors and endless hugs have been replaced by small, intimate gatherings of the bride’s and groom’s closest friends and immediate family members.

For many — including my fiancé and I — the celebration has been postponed until larger groups are allowed and out-of-country family members can attend.

While this has been bad news for many, those who dread the idea of giving a wedding speech in front of a large group of people may have appreciated the break.

But with restrictions lifting and larger wedding gatherings just around the corner, it’s important to remember that being asked to give a speech is an incredible privilege, and something that should be embraced.

Below are five tips on how you can crush your next wedding speech and deliver a meaningful message to the bridge and groom on their special day.

Tip No. 1 – Include an introduction, a body (personal story) and a conclusion

An introduction is incredibly important, because it sets the tone for the bulk of your speech.

Strong introductions usually include a sentence or two that hook the audience and set them up for the main theme of the speech, which usually includes a personal story.

For example: “Many of us think of John as hardworking, kind and humble, which are all undoubtedly attributes of his. However, there was a day, back in the third grade, when none of these words would have accurately described John’s behaviour…”

With this two-sentence description, I’ve given the audience a lot of information.

First, they know the speech isn’t going to be a roast or mean-spirited, because I started off by saying kind words about John. But the audience also knows there is a — likely humorous — story coming up, and I’m going to share about when John did something bad as a third-grader.

The main section of the speech — also known as “the body” — is the best fit for a story. An ideal length of time for a wedding speech is five to seven minutes, so keep this in mind when deciding how many details to include within your story.

The conclusion is your opportunity to wrap up the speech, say kind words about the bride and groom and tell them why you’re excited for their future.

Tip No. 2 – Get the audience to laugh… early

While giving a speech at a wedding can be intimidating, the good news is that the audience wants you to succeed. They also want to laugh.

By including humour in your speech — especially early on — you’re going to do two things. First, you will become more relaxed and give yourself a boost of confidence. Second, you will relax the audience. When audience members laugh, they are assured that listening to the speech is likely going to be an enjoyable experience.

I suggest avoiding inside jokes, which only make sense to a small group of people. Unfortunately, inside jokes seem to be incredibly common in wedding speeches, and it often results in a couple people laughing awkwardly and the rest of the guests feeling left out.

Also remember: the longer you wait to inject humour into the speech, the more difficult it will become to make the audience laugh later in the speech.

Tip No. 3 – Don’t write out your speech word-for-word

I understand this tip may be an incredibly scary concept for many, but the truth is: the less a speaker refers to his/her notes, the better the speech usually is.

I’m not saying you can’t have anything written down; however, stick to a few words or phrases that remind you of what you’re going to talk about.

In the previous example of the speech for John, instead of writing down the entire word-for-word story of what happened to him in third grade, you could simply write down subtle key words about various elements of the story so you don’t forget.

You should be able to fit all of your notes on a few cue cards, rather than multiple pieces of paper.

Don’t wing it when it comes to delivering a wedding speech.

A lot of people like to joke and say that they wrote their speech the morning of the wedding. Either that isn’t true (they’ve actually practised it a few times, and are simply trying to lower expectations), or, if it is true, the speech won’t end up being very good.

One way to practise is by recording yourself on your phone so you can watch back and discover parts of the speech that can use improvement, or any filler words you may be using such as “ahh” or “umm.”

You can also ask a friend — who ideally is not attending the wedding, to avoid spoilers — to watch you practise and give constructive feedback.

Being asked to give a speech at a wedding is a privilege, and by practising your speech, you are showing respect to the bride and groom.

Of all the five tips, this is the most important.

If you’ve been asked to give a speech at a wedding, it’s because you are important to the bride and groom; they care about what you have to say.

It’s great to add humour, practice your speech and use limited notes… but the most important thing is that the words you say come from the heart.

In Tip #1, I talked about the importance of an intro, a body and a conclusion. The best place for the meaningful, from-the-heart words is the conclusion, which gives you an opportunity to wrap a bow on your speech and wish the newlyweds a lifetime of happiness.

If you’re interested in learning more about being an impactful communicator, head over to my YouTube channel: https://www.youtube.com/channel/UCTEVBsx27Ub6vv0gu6ARsAg?view_as=subscriber

Wade Paterson is a champion public speaker with Kelowna AM Toastmasters. 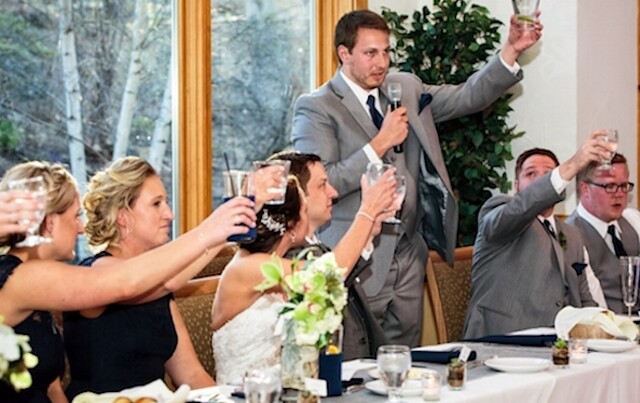