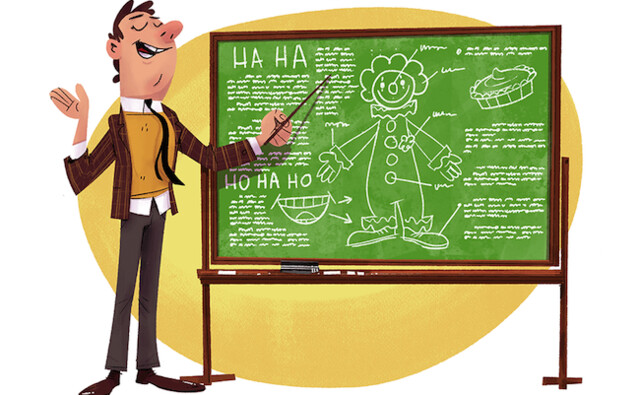 The latter requires that you not only make people laugh, but that you explain why they’re laughing in the process.

No mean feat, yet this is the task before me.

Curious readers, assuming I’m an expert, have written asking how the dynamic of humour works. Luckily, I define “expert” as someone who is an expert at convincing people they’re an expert.

Here is my expert opinion: If people laugh it’s funny; if they don’t it isn’t.

I know that sounds simplistic, but if your witticisms merely elicit a chuckle or chortle, the listener doesn’t get the considerable health benefits of a good, hearty laugh:

You may think this type of laughter sounds like ha-ha-ha or ho-ho-ho but, physiologically speaking, those two sounds are quite unnatural for humans to emit.

The only person who can make them is Santa Claus, and he can only do one. What’s more, an alternating ha-ho-ha-ho laugh is actually physically impossible. (Don’t test me by trying or you’ll end up in the emergency room with a compound fracture of the funny bone.)

On the other hand, ho-ha-ha and ha-ha-ho are within our capabilities, requiring the contraction and relaxation of 15 facial muscles, constriction of the epiglottis, and stimulation of the zygomatic major muscle which raises the corners of the mouth. The people who tell us this are gelotologists—scientists who study laughter.

I understand they don’t laugh much, not because they are humourless but because they’ve heard “Hey, nice move with your zygomatic major!” one too many times.

So you see, laughter is quite an accomplishment, and there are so many kinds. Contagious laughter, for instance, is when you literally laugh at laughing. One person starts, then another, and pretty soon 50 people are howling at … what? Nobody knows.

We also have maniacal laughter, indicating psychopathology; cackling, veering toward the occult; and diabolical laughter, which is as funny as an exorcism.

Etiquette laughter is another variety, employed when something is not funny to spare the feelings of the person who thinks it is … and nervous laughter, used when you’re afraid of what might happen if you don’t laugh.

Further along the continuum we find uncontrollable laughter, which can actually be fatal; the “snort,” which could result in passing food through your nose; and canned laughter, generated by a machine to create the impression that real people are laughing at something real people would never laugh at.

Physically, you can burst out laughing, crack up, dissolve, convulse, end up in stitches, or “laugh your head off,” proving that one person’s amusement is another person’s medical disaster.

Finally, there’s laughter from being tickled, which, technically, is not laughter at all. It is a conditioned response to being touched by another, which, to the primal brain, can signal either affection or aggression. Not knowing which, the hypothalamus hits the laugh switch as a signal of submission.

Your “laughter” is actually a way of saying “I give up. You win. Take my stuff.”

You see, then, that laughter is a funny thing, not all of it funny. The only kind that “checks all the boxes,” as we say these days, is the belly laugh. This is the real thing, the kind that produces all the benefits with no known side effects. If you’re going to laugh, this is the one you want.

The way I laugh from the belly is by reading about the Darwin Awards, given to real people who prove they are somewhere at the back end of the evolutionary chain by committing an officially documented act of astounding stupidity.

One recipient was a man who placed a $20 bill on the counter at a Louisiana gas station and asked for change. When the clerk opened the cash register, the man pulled a gun, demanded all the money, and fled.

His take amounted to $15 — $5 less than the $20 he had left on the counter, thus accomplishing the amazing feat of losing money in a robbery, while presenting law enforcement with the question: Is it a crime to give somebody money at gunpoint?

That man is funnier than I will ever be.