Devil with a blue apron on

Most folks assume they’ll know evil when they see it. I mean, who could think, for even a second, that Hitler was not pure, out-of-the-bottle, undiluted evil? Or how about a serial killer? Or some soulless bastard that kicks puppies? That’s not so hard, is it? Seeing that kind of evil should be pretty easy, right? Well, maybe not. Take Mr. Hitler for instance. It’s pretty interesting when you realize just how many “smart” people originally thought quite highly of Der Fuehrer and his theories on, shall we say, “race purification.” Bright, well-known intellectual lights like politician Winston Churchill, birth control activist Margaret Sanger, author H.G. Wells, former president Theodore Roosevelt, playwright and co-founder of the London School of Economics George Bernard Shaw and even famous British economist John Maynard Keynes. How could personages of such august reputation and stature not realize whom they were backing? Were they evil too? Maybe just a little, but not like Hitler, right? Could it be that recognizing evil is not quite as easy as we might think it is?

Kraft would certainly appear to agree. Out with an absurdly hilarious ad starring (if you can believe it) the Prince of Darkness himself Kraft is making comedy out of our inability to recognize evil when we see it. Now this has gotta be a first, because you don’t often see family-friendly consumer product companies dancing with the devil all that much. But I guess when you’ve got a whole mess of spicy shredded cheese to move any port in a storm can start to look pretty good. 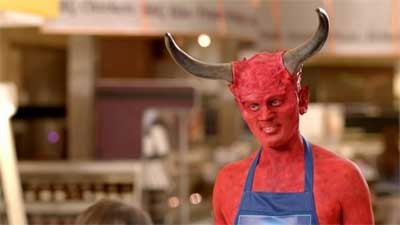 The ad takes place in a supermarket where right off the bat we see Satan – red as a pepper, sporting some serious horns and dressed like a dork in a blue apron as he mans a free-sample station featuring cheese nachos. Now before I go any further I have to say that I simply cannot imagine a better individual to handle the free sample area than Beelzebub himself. When you consider how surprisingly mean and petty some of those free-sample people actually are having the devil as their mascot only makes sense. What is it with them and guarding the samples like it’s the last bit of food on earth? Are they buying the food themselves? Do they get to take home whatever’s left over at the end of their shift? You’d sure as heck think so. Just try to grab a second taste of something interesting and see what happens. I’ve seen some pretty squishy smiles become pretty menacing sneers in nothing flat. Shouldn’t it be more fun to give things away? You’d sure think so…….

Anyway, so here’s the devil running the free sample station at the grocery store and he greets what have to be the two most clueless people in the world.

Devil answers, “Hot as you know what,” as he smirks a little grin, nodding his head knowingly.

The devil laughs, ‘cause they must be joking…..until he realizes they aren’t. “Beg your pardon?”

The devil can’t take this. He’s frustrated. “How are you not getting this?” And out of anger he stamps one of his cloven hooves, hard.

Devil, now thoroughly demoralized: “No, not like hot to trot.” At which time he turns to look around, almost pleading. “Is there something going on?”

This spot killed me. I could not quit laughing. I mean the guy playing the devil is so sure of himself and his schtick, so confident that it’s gonna work only to have his hopes get dashed so completely by the sheer, unbelievably dense stupidity of the average person haunting a free sample table. Here he is – Dark Lord of the Underworld - front and center in a supermarket and not only is he not recognized but he can’t even use his obvious demonic appearance to make a single point about spicy cheese. It’s funny as (sorry, I have to say it) hell for an ad, but just so painfully true in reality.

Unfortunately, I am fairly certain most of us will fail to recognize true evil when we are first confronted by it. More often than not, evil seems silly, or maybe even inconsequential. Rarely is it as well advertised as some giant red dude with horns and horse feet. But I guess that’s the challenge isn’t it? To actually determine where evil exists. I think the trick is that it’s rarely where you think it is, and way easier to fall for than you might ever believe. No, when it comes to finding evil you really have to work at it, and get as much outside help as you can. Kind of like scoring free samples. I have way more luck when I get a few friends and we work as a team.