A buddy of mine (and his wife, natch) just had a baby the other day. And amid all the ooooing and ahhing that invariably accompanies such a joyous event I tried to warn him about one of the greatest purchasing mistakes that any first-time dad risks: getting a lame-ass stroller.

Now I know this sort of thing may sound silly to any non-marrieds out there, or perhaps those without any kids, or women, or any people with actual lives and real things to worry about but bear with me. You see a new dad is a funny creature. He’s walked around up to this point in time thinking the world hinged on pretty much everything he ever did. He ate when and what he wanted, slept as long (or wherever) he felt like and pretty much lived his life as his own “billboard of cool.” The image he presented stemmed from his look, his haircut, his wardrobe – him. Then he got married – and truthfully, things still kind of went along the same. Oh sure he might have shared the remote control from time to time, maybe even agreed to host dinner parties for their (her) friends but through it all he remained his own best advertisement. His image was defined by him. At least it was……until little junior poopy-pants arrived.

Now this is the turn. This is where the party…shifts. And remember, the poor guy is shell-shocked. He went from a world he understood to one in which he alternates between feeling sorry for himself (due to the lack of attention being paid to him) or feeling guilty for all the extra burdens that have clearly been dropped on poor wifey. Sure, he can offer to feed the baby – or change him - but everyone knows the kid really doesn’t want him. They want mom. They always want mom. And mom’s the one whose body has done doughnuts just in delivering the little interloper. So, dad is understandably flustered and confused and trying to find his way in this new reality. Of course he’s gonna miss out on the importance of a stupid stroller.

At first, whatever stroller or buggy you buy doesn’t seem like a big deal. Move kid from A to B without carrying them – simple. But as a guy your image (at least as you knew it) is gone. That first time you step out with little sweetie no one – and I mean no one - is noticing your flash shoes, or your wicked leather jacket or even those rocking shades you bought in New York City. They see the baby. And when that realization finally comes home you glance around from left to right, trying to assess just who’ve you actually become. And invariably who you’ve become is the fleshy, hair-losing knob that’s charged with pushing the doofus-wheeled, plaid or floral printed abomination of a carriage you agreed to buy. Not only are you officially “the help” but you don’t even get to look cool doing it. And now it’s too late. You already let your wife buy the sensible stroller no man should ever be caught dead pushing.

Oddly, Kumho Tires gets this. The South Korean tire manufacturer has been making some TV spots focusing on guys using massive tires to “improve” the cool of their children’s strollers. If you watch the spots they are obviously trying to use humor to sell their tires but I wouldn’t be much of a commentator if I didn’t acknowledge just how horrible they actually are at it. Without exception their ads have been quite hopeless. They’re not that interesting, or particularly funny, and they’re not even acted all that well either. In truth they look a lot like someone shot them using a broken handicam only to edit the whole mess together on an out-of-date iPhone while doing a crossword puzzle with the other hand. But they did get one thing right: a guy needs to obsess about his – and his kid’s – first ride.

I know what you’re thinking. What kind of a shallow dipchuck do you have to be to worry about this kind of trivial thing? The answer? A dad that suddenly realized zip-quick how much more fun it is to push your kid around in something tough and cool and awesome versus the carriage equivalent of some ridiculous Smart car or a friggen Prius. If the stroller you’re pushing doesn’t make you feel the same way you did when you bought your first sports car you need to trade it in – stat! And when you do, you’re gonna thank me ‘cause nothing beats taking your offspring for a stroll in a set of wheels you’d be proud to ride in yourself. 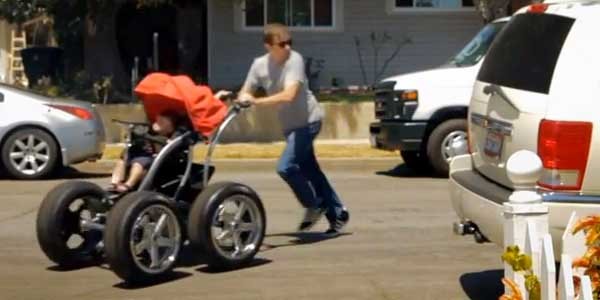