When it comes to effective methods of intellectual assault, some well-placed mockery can be unbelievably brutal. Most of us have little trouble finding ways to counter such familiar indignities as general insults (I know you are but what am I?), physical abuse (Hello, 911?) and any other run-of-the-mill statement showcasing the speakers basic stupidity (Talk to the hand, schmuck). And yet when faced with professional, nuclear grade mockery even the sharpest of minds can be left spinning endlessly inward, making ever tighter, frustratingly self-damning circles. Even answering mockery has the unintended side-effect of validating it, so however could anyone fighting it really win?

Take Jonathan Stuart Leibowitz. By his own admission, he was well on his way to a singularly undistinguished career as a bit player in TV and films. Scoring roles in such not-on-your life blockbusters as Jay and Silent Bob Strike Back and the truly horrible Death to Smoochy, he even tried guest slots on Newsradio and the rubbing-one’s-flesh –on-a-closet-door-sized-cheese grater awful The Nanny. Talk about a recipe for being forgettable. But add in a dash (no, scratch that, add in a tanker-truck) of full-force mockery and you have Mr. Jon Stewart, head mocker-in-chief of The Daily Show.

Now, technically, Stewart and his crew refer to what they do as “satire” which is fine I guess. But in all fairness, the only real difference between mockery and satire is the first lacks the somewhat more appealing wit and vocabulary of the second. So here is a guy who saw his big break in The First Wives Club hit the cutting room floor now being discussed by the New York Times as (possibly) the only legitimate heir to Edward R. Murrow’s legacy of “honesty and integrity in delivering the news.” Not too shabby, I’d say. Wield the knife of sarcastic put-down well and the world will be yours, Jonathan-san. 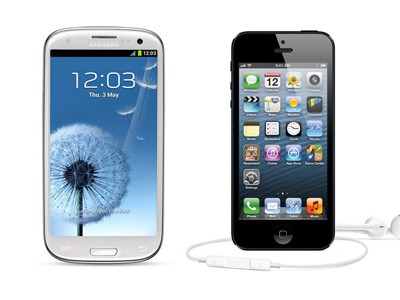 So is it any wonder advertisers might want some similar heat for themselves? Well check out Samsung. They just aired an entire commercial of almost undiluted mockery to devastatingly effective use. And it was against the biggest of consumer-cults running today: Apple iPhone fanatics. Now, everyone knows the Jobs-founded juggernaut is cruising at an all-new altitude thanks to its favored position of being the purveyors of any new tech must-haves. Heck, the company is even approaching the $1 Trillion (yes, trillion...) dollar mark in overall value. As a competitor to this kind of massive beast what methods are even left when it comes to making a dent in them, let alone ever cutting them down to size?

The ad is ruthlessly efficient – and funny. It opens on a street in Chicago showing huge lineups of people waiting eagerly to purchase the newest iPhone. Breathlessly, the line waiters discuss rumors of new features, designs and even confusing add-ons, which in some cases they don’t even understand. The scene then switches to other lines in New York and even Los Angeles. As the camera looks (and listens) in on the various folks we see very clearly an entire grouping of people no smart person would ever truly want to be. But the iPhone is pretty friggen cool, right? So maybe it’s worth being kind of lemming-like get one, right? And then the turn.

One guy in line notices the dude nearby and recognizes him as a Samsung Galaxy SIII owner (Apple’s big iPhone competitor). He welcomes him back, suggesting that obviously if he’s in line for an iPhone the whole Galaxy SIII phone clearly didn’t work out. “No, I love the GSIII, it’s extremely awesome. I’m just saving a spot in line for someone.” What? Oh no....... 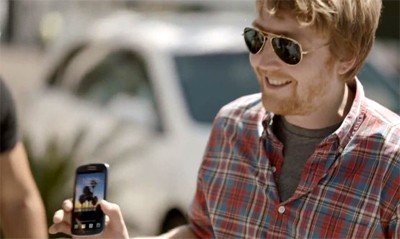 Cut farther back in line. iPhone geeks are discussing the features they expect to get this time when they see two GSIII users do something they are unfamiliar with. “Hey, what is that? What are you doing?” The two guys swapped play lists by touching phones – something iPhones cannot do. But then it drives the knife home – and twists. The people whose spot is being saved finally arrive. It’s the dude’s parents – two happy, friendly (and clearly uncool) baby-boom types eager to get their iPhone while their smarter, more cutting-edge son enjoys his GSIII. At that instant the notion of owning an iPhone just seemed so sad to me. So lame. So....yesterday. Was it mockery? Satire? I’d say both – in spades.

By this point the iPhone lineup has completely slipped the rails as new Samsung devotees start popping up around them. The iPhone-craving cattle, constrained by the velvet ropes, now start to strain at their bonds, questioning their devotion to all things Apple. The new features promised by Apple are contrasted with the already existent GSIII, and usually bettered. The case for being in line has now crumbled completely, even as one poor, deluded soul makes a last ditch suggestion that of course Apple will provide what they need – if not now, at least later. Insert head shaking from side to side here. Game, set, match.

So if a guy like Jon Stewart can become a world-beater thanks to some well-written takedowns of those larger than himself why can’t Samsung take a run at the be-fruited behemoth currently standing astride the consumer tech universe? What’s Apple gonna do? They can’t respond – that never works. And they certainly can’t engage on Samsung’s level. They’re already at the top. Throw a rock and it just doesn’t work. No, just like all the decision-makers and politicians and big shots alike, all you can really do is run and hide while Jon Stewart wails away with his mallet of mockery. Their only real hope is that Stewart might someday get so full of himself and his successes that he might warrant a little mockery of his own. But that could never happen, now could it?