Anyone who reads most of what I write can tell how much I enjoy the flotsam that is pop culture. And leaving aside the fact that I’ve been saturated in it for most of my life, even the grumpiest stiff would have to admit that pop culture is way more fun to discuss than say, the digestive tracts of pan-Brazilian pond frogs. Or Canadian monetary policy. Or shingles. Still, even as I wallow in the shallow inanity of such intellectual codswallop I do have enough on the ball to recognize how inherently silly such things are. I mean really - will my knowing that Daisy Duke’s jeep’s name was “Dixie” ever stop a war or save someone’s life? Unless I move to Hazzard County and tick off Boss Hogg, I’d say it’s fairly doubtful.

Yet when it comes to something important - like politics – well, that matters. Wait, no - don’t stop reading! Yes, I agree. Politics can be boring and dull. And the people that practice it can be cloying and even slimy. But consider for a moment. Politics is quite literally the way in which your life is ruled – from down-home locally to big, bad, wide-world globally. It might be as yawn-inducing as aerating a lawn but it matters...a lot. Now it may seem odd, but actually I quite like politics (almost as much as pop culture in fact). Then again, any opportunity to take the opposite POV to anything if it might lead to a dramatic spit take (eg: Mother Teresa is a fraud - see the estate of Hitchens, Christopher for ideas on how you can play) is worth enjoying. So what happens when the two collide?

Clearly, the TMZing of the world is near complete as the serious has so successfully mated with the inane that almost nothing retains valid merit anymore. Case in point is the impending US presidential election. And my two examples come from only this past week alone. 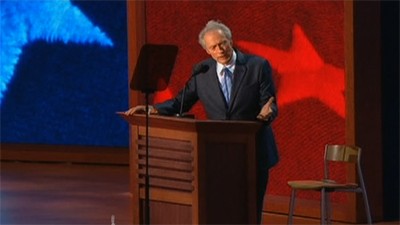 The first features Mr. Clint Eastwood and the Republican Party. In this case, the famous movie tradesman decided a few months back that Mitt Romney was his guy – and publically said so. To seal the deal, Clint agreed to give a short speech of support at the recent Republican convention. And what a speech it was! Held up by the mainstream media as proof that old Clint had finally lost it, the Man With No Name stepped up to the podium and gave an off-the-cuff speech where he used an empty chair as a prop in a mock Q&A with an imaginary President Obama. Personally, I thought it was a pretty funny takedown of the current dude in charge. Sure it was kind of goofy and unpolished but what the heck, he’s just an actor – who cares what he says anyway, right? 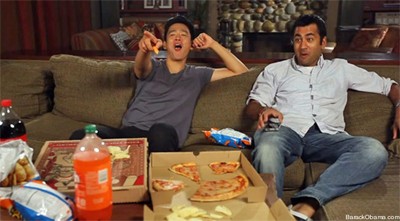 The second was a commercial featuring President Obama and two of the more famous movie stoners working today. Given my age that could mean Cheech and Chong but in this case it was actually Harold and Kumar of Harold and Kumar go to White Castle fame. In the spot, the scene opens in what can only be the White House where the man himself picks up the phone, dials and then speaks: “Hey, this is Barack. Listen, I need to know if you’re on-board. Okay, good. Because I’m counting on you - everybody is. We have to get this right, so there’s a lot at stake here. Just remember that I’m trusting you on this and I’ll see you there.” He then hangs up the phone as we slide-cut to the recipient of the call – Kumar, sitting next to Harold, or rather actors Kal Penn and John Cho, acting like Harold and Kumar.

The two buds are splayed across a couch, watching cartoons apparently, with pizza boxes and various other munchies spread around. “Harold” asks – “Dude who was that? Sounded intense.” “Kumar” then answers, “The President.” Harold: “Sweet.” And they continue to watch cartoons until something funny happens on screen and both burst into ridiculous, slightly insane laughter. Eventually, the text comes on screen to tell us that Kal Penn will be hosting the DNC convention coverage. So, Obama is not really calling Kumar, just Kal Penn - but it’s still a big, inside-y, pop culture-y joke. And it was pretty funny too. But.......

As I watched, and as I laughed, I eventually found that a huge part of me could not let go of the idea that the most powerful man in the world would have spent at least an hour or so being briefed on this moronic idea, not to mention shooting it. He would have had to consider the script, have it explained to him (assuming he is unfamiliar with their movies) and be more or less marinating in the crazy, pot-filled world of Harold and Kumar for far too long. I mean, this is the guy that has the nuclear codes, that actually knows what’s going on inside Area 51 and that has real-world responsibilities that matter. And he’s wasting space on Harold and Kumar? Really? I mean, I feel guilty that this sort of stuff pollutes my brain, but his? The man is supposed to be busy. He shouldn’t have time for this.

Politics matter for how they organize the world around us. Pop culture matters for how it orients us in the world as organized, but while one is necessary the other can quickly become a sideshow distraction. I’m much more impressed when a true grownup has no idea what American Pie actor Jason Biggs ever did to a pie versus my own, sick understanding of the pop cultural truth. One is not serious – the other should be. I don’t care if you side with Clint or Harold and Kumar, but don’t think there is no difference. And for my money, the person that can make the proper distinction is the one worth listening to.