There is no easy way to say this: I’m going to die. Yes, I - me, the AdFool guy - am absolutely, positively going to die. But then again, so will you. It’s about the only thing all of us truly have in common. Each of us is going to kick it eventually. And, obviously, many businesses have been constructed around the cold reality this rather uniting communal certainty provides: funeral homes, grave stone marker companies, casket makers, embalmers, lawyers, caterers and more. Well, believe it or not, but the digital age has gone and bequeathed yet another entry to what many would have assumed was a rather definitive list of post-death trades: A Death App so that dead folks can communicate with the living.

It might seem crazy (or even pretty creepy) at first but in a Facebook world it was only a matter of time before a company recognized the need for such a service. And when you figure the tech platforms we now have available this kinda beats those Ouija boards all to hell (maybe even literally, I dare say?)

The app is called If I Die and it lets users post a final message to their Facebook “wall” once they are dead. So basically, you write a message or record a video of yourself – send it to them – and when you actually croak, said message will be automatically placed on your Facebook page as a final farewell (or F.U.) to whoever sees it. But it doesn’t stop there. For a fee (of course....) you can record or prepare numerous messages, notes, alerts and whatnot to send to a whole host of folks in various ways at various times. Literally, you can ensure that loving emails get sent to someone you care about every week for a year or more. Alternately, you could also orchestrate a pretty intense post-death harassment campaign on someone. Imagine getting threatening emails from the grave at random dates and times (“I’m watching you” or “I know what you did” or “Why don’t you mow the lawn you useless piece of sh.....”) – well, you get the idea.

Now, the Israel-based company behind the app (Wilook) first released it in 2010. They got quite a bit of attention back then by running an ad campaign that sourced people’s location info (through Twitter and Google) and then called the places they were at, asking for them. When they came to the phone they would give out a personalized message like “Death can catch you anytime, anywhere – even where you are now, James!!” which I am certain led to more than a few pairs of urine-stained undies. But time moved on and so too did our attention – so the If I Die folks had to try a new way to get our attention. This time, the bait is fame.

The deal is that if you sign up for their service – and happen to be the very first to actually die (after signing up) - you will receive the seemingly glorious opportunity of having your last message released, broadcast, and promoted across a whole host of digital platforms – supposedly ensuring your words will be heard by more than 200 million people. They guarantee 20 million will see your message on Mashable alone. Its unique, I’ll give them that. But it’s also kind of twisted – and more than a little bizarre. Consider, what if you were already toying with the idea of committing suicide? Doesn’t this app just scream out as the greatest way ever to get exactly the kind of guilt-tossing attention your slightly suicidal self might be pining for? And wouldn’t that mean the app ought to shoulder at least some of the blame for speeding up (or even initiating) your own personal death calendar? Take it further – they say any message is acceptable – bad or good. So what’s to stop some enterprising Islamic Jihadist to set his message of violent overthrow and radical transformation before quickly blowing himself up in a train station?

Look, I always liked those movies where the old rich guy videos himself reading his will, and then has it played for the family after his death. They all sit quietly while he gleefully explains that he is indeed dead and that he is speaking to them from the grave – before going “Wooooooeee” or something like that. Well, as I see it, this is pretty much the same deal except we skip the expensive lawyer and place our trust in digital delivery versus relying on the memory of some disinterested junior assistant actually remembering to send it around. And if I gotta die anyway, it might be cool that lots of folks get to hear what I had to say. Lots of us imagine what our final words should be. I know I do

But even as I start to get lost in cloudy visions as to what I might say, or to whom I might say it, I am forced to realize that one of the main points of death is that you have finally been shut up once and for all. Sure some folks will miss my incessant prattle but plenty more will be mighty pleased that my flapping trap is mercifully silent. This app would certainly put an end to that. No, I think when it comes to my final words I`m going to go with the tried and true method of letting them be whatever they will be. My only hope is that when death finally comes knocking I don't blurt out something ill-advised like “Well, I’ll be damned.” That`d be pretty dumb now, wouldn`t it? 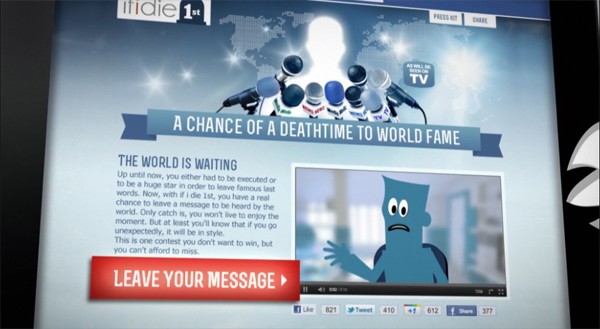