My bizarre attraction to advertising has always been rooted in a larger search for objective truth. Ask any good salesman: to really sell something, you need a solid truth to build on. Sure, ads and promotions quickly become comedies of hyperbole and wild exaggeration, but when you boil even the goofiest theme down to its core a sincere truth must be evident for any commercial to resonate. And the more truth that exists, the more likely that product will sell because we humans are pre-programmed to respond to truth. Think about it. Why do most folks like the Olympics so much? In the competition, in the effort to be the best, we see truth. That’s why things like cheating and doping scandals are such a big deal. The inherent truth of the competition (who is “best”) gets tainted by the lack of purity shown in any less-than-honest pursuit of that ultimate success. We all desire truth, whether we admit it or not.

Now perhaps you’ve heard about the recent ad in which Nike shamelessly abuses a poor overweight boy to sell athletic shoes? No? Well then maybe you heard about the inspirational spot they created to showcase the greatness every person has inside them? Still no? Okay, how about Nike’s brilliant bit of creativity to get around the voluminous Olympic rules prohibiting Olympic advertisements from non-Olympic sponsors (of which Nike was most interestingly one). Nothing? Well guess what? It’s all the same ad! (Bet you never saw that one coming huh?)

Nike’s ad campaign was called “Find Your Greatness.” In the ads, they highlight all manner of homegrown, everyday athletes. No Olympic champs, no pro sports stars – just little leaguers, neighborhood kids, couch gymnasts, etc. Just people doing what they do with little to no audience at all. Great ads – and the cheeky part came with one cool hook. All the folks showcased hailed from towns featuring the rather Olympic name of “London” – Little London, Jamaica, London; Norway, London, Ohio; Small London, Nigeria… Nice eh? But that’s not what made this so special. 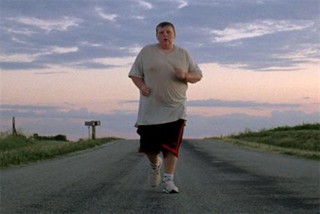 What did it for me, where the truth literally jumped out, was one spot featuring a young lad from London, Ohio. The commercial itself was devastatingly simple. A single shot of a deserted rural roadway either at dusk or early morning. Away, we see a shape in the distance, blurred and fuzzy, but moving toward us. It’s not clear at first, but then it is. It’s someone running – and apparently with some difficulty. The narrator speaks:

“Greatness, it’s just something we made up. Somehow we’ve come to believe that greatness is a gift, reserved for a chosen few, for prodigies, for superstars.”

By this point the runner has come into view. It’s a boy, a young boy, maybe twelve or so – and he is fat, big-time. His face is flushed, and he is laboring with each jogged step. But he continues, and his soft staccato footprints punctuate the rest of the narrator’s speech:

“And the rest of us can only stand by watching. You can forget that. Greatness is not some rare DNA strand. It’s not some precious thing. Greatness is no more unique to us than breathing. We’re all capable of it. All of us.”

Wow. If I ever felt more guilty sitting in front of a TV with my orange-stained hand jammed inside a bag of Cheetos I can’t remember it. In one fell swoop, Nike lays bare some real truth that relates to every single human being on the planet. Is it any less valid because it’s in service of shoe sales? Not to my mind.

Some have tried to argue that the boy is being exploited, that his “obesity” is being used a commodity to shame us (and him) in a cynical way to service an international juggernaut. Well, assuming the boy struck a deal he was happy with, and that all attendant rules were followed, I think he’ll be okay. The message his commercial sends is for him too. What we want, whatever it is - the greatness we all seek in our own ways – is only available if we are willing to put in the often bone-crushingly lonely work of placing one foot in front of another. No fans, no cheers, just cold, hard roads and early mornings. Will we make it? Who knows – but the message is the thing. And Nike as a company has always managed to use message better than most. Just Do It was iconic because it touched truth. Find Your Greatness is no less a call to personal arms. I loved this ad – for its starkness, for its simplicity. For its truth.