Okay, here’s the thing: I hate shopping at Rona. My reasons may be shallow but they are specific. Every single time I go there the aisles appear junky and crammed, not to mention tall, dark and narrow. The shelves (in way too many spots) almost always look like they’ve been picked clean by some survivalist flash mob desperate to stock their end-of-the-world shelters. And wandering around the store I constantly run into areas where retail displays have been left to degrade into bent and disfigured approximations of what they once were (eg. a lovely faux home-office display apparently ripped apart in a fury with desk lamps lying broken, chair pieces affixed yet abandoned and random items half stuffed in torn boxes. Seriously, Damien Hirst produces less disturbing installations.

Anyway, given the choice I usually head to Home Depot, which might tick off the “buy Canada” folks but not only does Home Depot use more light in their store (I can see! I can see!) but they also have race car shopping carts to push around, which makes buying paint, nails and furniture sliders way more fun than it ever should be. So, if I hate Rona so much why did I just buy shares in them?

Don’t worry – it’s not because I think they’re doing anything particularly right. It’s more because I read that US home improvement juggernaut Lowe’s might be looking to buy them out (which means maybe they’ll be able to afford to turn on some more friggen lights in those cavernous bunkers of theirs). Anyway, true to form, Rona has quashed that good idea and said they are “not for sale” and apparently have no interest whatsoever in selling out to the Lowe’s brand name. It would seem they have more faith in their supposedly brilliant restructuring initiative (Ahem, lights guys? Are lights a part of this stellar turnaround plan? Guys?) which is just super. So not only have I now bought shares in a company whose stores I don’t like shopping in but I have obligated myself to support their efforts if only to keep from losing my own cash in the process. Gee whiz I’m an idiot......

So when you consider what a high bar of dissatisfaction they have to overcome (in my case) I was pretty blown away to find myself loving their most recent Olympic advertisement. It actually made me...well, not think quite as badly about them. 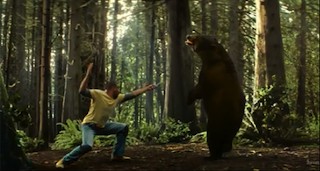 The commercial opens with a flyover view of Vancouver. The music playing conveys a sense of urgency, and importance – it even has a spaghetti western feel. We immediately cut to a rather husky, contractor- type running down a Vancouver street, wearing a loaded tool belt and carrying a blue screwdriver in one hand. He looks serious – deadly serious. We follow him all the way through the city, into the suburbs and finally out to a grassy field where another carpenter type stands waiting, relay style, for a handoff. The look of intense concern is on his face too. Husky Jim-runner hands off the screwdriver and our new carrier darts off, navigating a forest, fencing(?) with a grizzly bear and long jumping over a chasm. Then he too hands it off.

The new guy is in a kayak and, gripping the screwdriver in his teeth, paddles down an insane set of rapids. The country-wide relay continues apace as another dude gets the screwdriver and high jumps through a barn window (onto a chicken apparently) where he hands off to a cyclist who races a CN train across the plain. The biker is then seen gliding along with a herd of buffalo until he hands off to our first female contractor-type who sprints straight off across some fields, jumping all the fences hurdle style. It then goes to a diver who leaps Niagara Falls, lands with a band of synchronized swimmers who mirror the CN tower (which makes two CN references – as a shareholder I hope they had to pay for this PR) before handing off to a race-walker, which to my mind remains one of the most hilariously ridiculous sports ever invented thanks to the sport-specific, sashay hip swivel they model at every event.

We get an equestrian rider, an archer and finally a gymnastic tumbler who full flips all the way down a coastal dock on the exact opposite side of this great land of Canada only to hand the screwdriver baton to a waiting workman in need. His response?

“Thanks. You got a hammer?”

The look on our gymnast-carpenter’s face says it all, as he takes a deep breath, turns and immediately sets off to run in the opposite direction as the text comes on screen “Nobody said doing it right was easy.” The ads were done to answer the success their 2010 effort in Vancouver produced (remember the tape measure ad?) and seem like they really hit a winner.

Now I could be picky and go on about the commercial mimicking the rather Homer-ific journey it often feels like when shopping at Rona and trying to find things but I won’t. I really like the ad. It’s fun and compelling and perfectly done to make you watch it all the way to the end. I’ll grant you that I’m caught up in the Olympic hoo-ha somewhat but who cares? It’s the right ad at the right time.

So does that mean I love Rona now? Is it the place to shop? Maybe I should hang onto my stock and hope for a turnaround? Well, a great commercial might indicate good things ahead, or it might mean nothing more than a really great commercial. Tough choices - but I did hear somewhere that nobody said doing it right was easy. Kind of an interesting counterpoint to Home Depot’s “You can do it, we can help” isn’t it? Hmmmmmm.......