I was an actor once. Not famous (obviously) or even that particularly good but I was indeed a bona fide, union card-carrying actor. In fact, you may remember me from such stellar films as Inferno der Flammen, a direct-to-video German feature where I portrayed a non-essential helicopter pilot with a gun to his head. Or maybe you caught my turn as Mike the burly neighbor alongside a post-thighmaster Suzanne Somers in The Darklings. There were others, and truthfully they were all just as bad, but the thing is, when you consider yourself an actor at no time do you ever believe there is a role anywhere that you could not play. Any actor, any time, believes they can do anything – because it’s make-believe and that’s what acting is all about. So why is everyone getting on Ashton Kutcher over his latest gig?

You must have heard by now about his “racist” ad – a series of commercials where Ashton portrays different men looking for love on some faux dating site. It’s all a sort of stealth stand-in advertising PopChips snacks. The ad’s conceit is simple – Ashton presents himself as several different characters making videos for a generic dating site that subtly mentions PopChips. He does his best metrosexual German designer (Karl Lagerfeld to be exact), a sensitive biker named Swordfish, an English stoner/hippie-type and an Indian Bollywood film producer. Objectively, the portrayals are all really high-school level improvs but you can see the idea. Ashton gets to show off his comedic range, have some laughs and make some dough. Well, that might have happened if not for the delicate sensitivities of much of our world today. 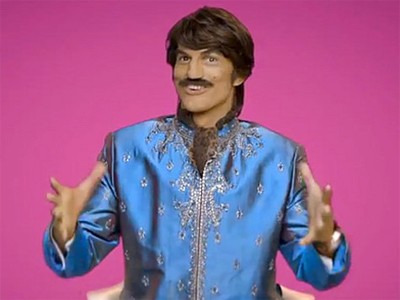 The ugly slurs and screams started almost immediately. RACIST! How dare he? Kutcher was accused of donning “brownface,” a term morphed from the “blackface” method employed during post-Civil War minstrel shows where some acts took to mocking black people and their culture. In this case, Kutcher was deemed guilty almost instantly of insulting Indian people, causing PopChips to suffer a corporate aneurism. They pulled the offending ad and immediately retreated to a corner, putting their hands over their ears and going “lalalala” over and over again in hopes it would all go away. That they did this before Kutcher could even remove the link from his Twitter-feed is amazing. Must not be racist...must not be racist...must not be racist........

But why is this racist? What did they do that was so cruel or even offensive? And how come he can portray a pasty-faced German bisexual and that’s okay? Don’t they have feelings too? Why isn’t an English stoner named Nigel off limits? Aren’t slack-jawed, biker-types deserving of blanket cultural protection as well? What if Swordfish is Polish or Dutch or even part Chinese? Isn’t that just as insensitive? Is it only the race being poked at that’s wrong? I just don’t get it.

Have we lost our friggen minds? Seriously, is this what the world has come to? I mean when even a lightweight like Ashton “Kelso” Kutcher is getting busted in the chops for racism because of some dumb ad what are we saying about ourselves? Are we really so dull and uninformed that we’ll instantly applaud any moronic charge of racism – no matter how ridiculous it might be? How can we bow our heads and accept this garbage? It’s insane.

Real racism is actually pretty easy to define. It’s the belief that one race is superior to all other races. That’s it. That’s racism – and culturally that kind of thinking is effectively dead in most of North America. There is no way anyone making those commercials was being racist. They were a bunch of creatives laughing their butts off about how brilliant they thought Ashton was at portraying four vividly different characters. That’s it. No offense intended.

And besides, why is it only this Indian “stereotype” that’s so offensive? Where is the backlash over Hank Azaria’s metaphorical “brownface” every time he does Apu on The Simpsons? Oh right, that’s satire, so that doesn’t count ‘cause that’s being done by smart people. Right, I get it. But didn’t Mike Meyers do an entire movie as some Deepak Chopra-huckster-type? That was different? How? What about the mountain of Indian clichés and tropes piled high on The Big Bang Theory or is that only okay because the guy acting him is already Indian? Is that how this game works? This is crazy! When is this funhouse mirror we’re all staring into finally going to implode so we can all unscrew our tight assess long enough to return to the land of the thinking?

PopChips pulled the ad and all I can say is that I wish they hadn’t. I wish they’d had the stones to say “it’s a joke people – no offense was ever intended - get over it and move on.” We are doing such a huge disservice to actual racism in our society by trivializing it for moments like this. We’re people, not porcelain dolls – when did everyone become an identity group to be appeased and sucked up to? Everybody needs to lighten the hell up

Actors are nuts – that’s a given. But when even the dumbest game of dress-up drives the race-hucksters into overdrive it’s time for some sanity to return. Go out right now and buy some PopChips. Show the world you will not be cowed by fake charges of racism. Don’t get curry flavour though – that stuff gives me the toots something awful. That doesn’t make me racist, does it?