How low can you go?

Contributed - Oct 3, 2014 / 5:00 am | Story: 124041
Have you ever felt that gut wrenching feeling when you have had to cancel a project you are working on or didn’t make your goals. It is a low feeling indeed.
We often see examples of athletes who experience the same lows. I always remember thinking I could not understand how a grown man could cry because he came in second place in a race. While that may have been my opinion many years ago, the tables turned on me when I was actively racing with my rally team. 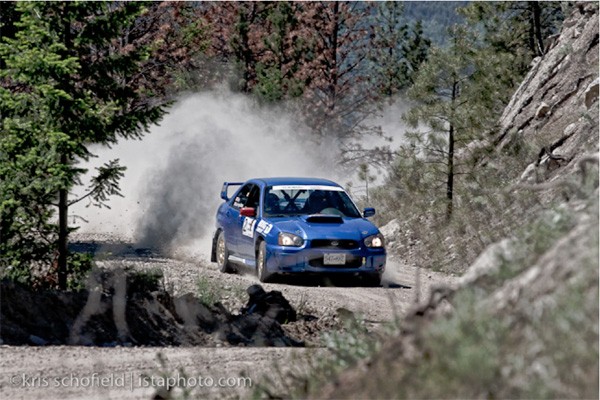 Photo: Contributed
Several times I have gone from 1st or second place in an event to last because of a mechanical issue or driver error. The feeling is not pleasant.
One particular time in Merritt BC, I was racing my Eagle Talon with the support of local Mitsubishi dealer, Valley Mitsubishi. I had placed well after Friday evening’s stages and was probably sitting around 6th or 7th in the national standings. Saturday morning started with a drive up the connector to a group of stages near the old toll booth. On my first run through I noticed I was having a difficult time changing gears. Then finally, I had no clutch!
I started two stages by putting the car in second gear, starting on the start line by turning the key in second gear and then running the stage with no clutch.
Interestingly I managed a 4th fastest time on one of those stages. Sadly, the car was not going to get through the day. A mad flurry of activity over the service period at lunch gave me a respite. We hurriedly left for the next stage and sure enough no clutch after that stage. It was then that we threw the towel in. As a mature, grown man, I sat on my car and cried! I couldn’t help it. The thought of all the effort everyone around me had put in to get us in the event and to continue through the event was hard to think about. We had just lost a good position in a national event.
The feeling was all too familiar for me a few months ago when I decided to postpone a 650km run in Africa alongside Connor Clerke. We had not attracted enough funding and with the Ebola outbreak and Al-Shabhab doing their thing, we did not want any of the public coming with us to be put in any danger.
The good news is, we are going next year. So the end result is not as bad as the rally event.
The even better news is we have another exciting project planned. As one door opens, another one closes!
Several months ago I was chatting to Jim Bates at Fresh Air Concept (www.FreshAir.bc.ca) and told him about a crazy idea I had. I had decided to attempt another world record to help our charity, Rally4Life. I looked to see if anyone had done such a crazy thing before and sure enough I would be the first. Nobody had ever ridden a unicycle underwater before.
You read that right!
A few years later I contacted Guinness who advised me that the record had been set and was now close to 2kms!
When Jim had picked himself off the floor laughing, he decided it would be too much fun to be involved and so a few weeks later a Unicycle showed up at my door. A unicycle that I am struggling to learn to ride!
I will reveal more about the project in a future story, but watch this space for news for the “solo round the pool” expedition to pedal (not paddle) 2.5kms in the Kelowna area.
We will be hosting a fun fundraising party for the charity and you may even see Jim Bates sitting in a corner scratching his head and wondering what compelled him to even get involved in the first place!
A big thanks and shout out to Fresh Air who support a lot of community events.
For those of you who like Rally driving, head over to Merritt today and Saturday top catch National level action with 36 driver competing for top honours in the Canadian National Championship. Visit www.PacificForestRally.com for more information.

For the past twenty years Mark has been involved in real estate development and consulting and is currently a REALTOR with Sage Executive Group in Kelowna.

His column, brings a unique perspective on what may be important to us in the future as we come to grips with fast paced change in a world that few people barely recognize.

His influences come from the various travels he undertakes as an Adventurer, Philanthropist and Keynote Speaker. More information can be found on Mark at his website www.markjenningsbates.com