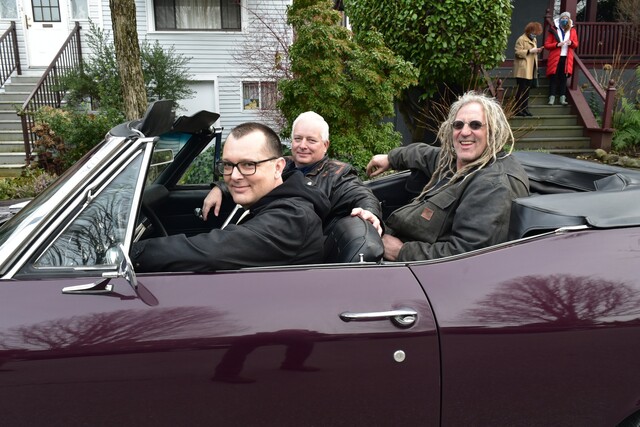 Brian Saunders is longing for the time he can cruise down a winding ribbon of asphalt along the California coastline.

The Burnaby school teacher is the 2020 winner of Habitat for Humanity Kamloops’ Classic Car Raffle. Saunders got the keys for the dark cherry red, 1968 Beaumont convertible delivered to him in early January by the Rust Bros, who restored the classic muscle car. The Rust Bros are stars of the History Channel and Netflix reality car show Rust Valley Restorers.

“Once things with the pandemic change a bit, I want to drive down the coast to L.A. It’s the perfect car for that,” says Saunders, who purchased his ticket online.

“When the ad popped up, I knew Habitat for Humanity Kamloops was a good charity, and I bought a ticket,” he says. “But I really didn’t consider winning it.

“Just like most raffles, you pay for the joy about thinking if you did. You are buying the dream for a few weeks.”

When he got the phone call a few weeks ago that his ticket had been drawn, the reality did not sink in right away that he would soon be getting the keys to the restored, rare classic valued at $102,500.

That is what drew Mike Hall, star of Rust Valley Restorers, to partner with Habitat Kamloops to supply a total of five cars from his shop in Tappen for the Classic Car Raffle.

“They (Habitat Kamloops) do a lot of good things for people, and I thought it would be really nice if we could be involved,” Hall says. “Everyone deserves a nice place to live. And there’s a lot of people who sadly don’t.”

Hall added he’s proud of the efforts of his Rust Bros team to transform the car that was part of his collection.

“It didn’t look like this when the folks at Habitat Kamloops first saw it. It was rough,” Hall says. “It needed pretty much everything, including a whole new front end.

“They only made 47 of these. It’s a 327 Beaumont custom rag (convertible), so it was a pretty rare Canadian car.”

“They’ve got me pretty busy already,” Hall says. It’s a great partnership. We get to build some cool stuff, someone gets to win a rare and valuable car for just a $25 raffle ticket, and people get a nice place to live.

The delivery of the 1968 Beaumont will be featured on an episode of Rust Valley Restorers later this year.