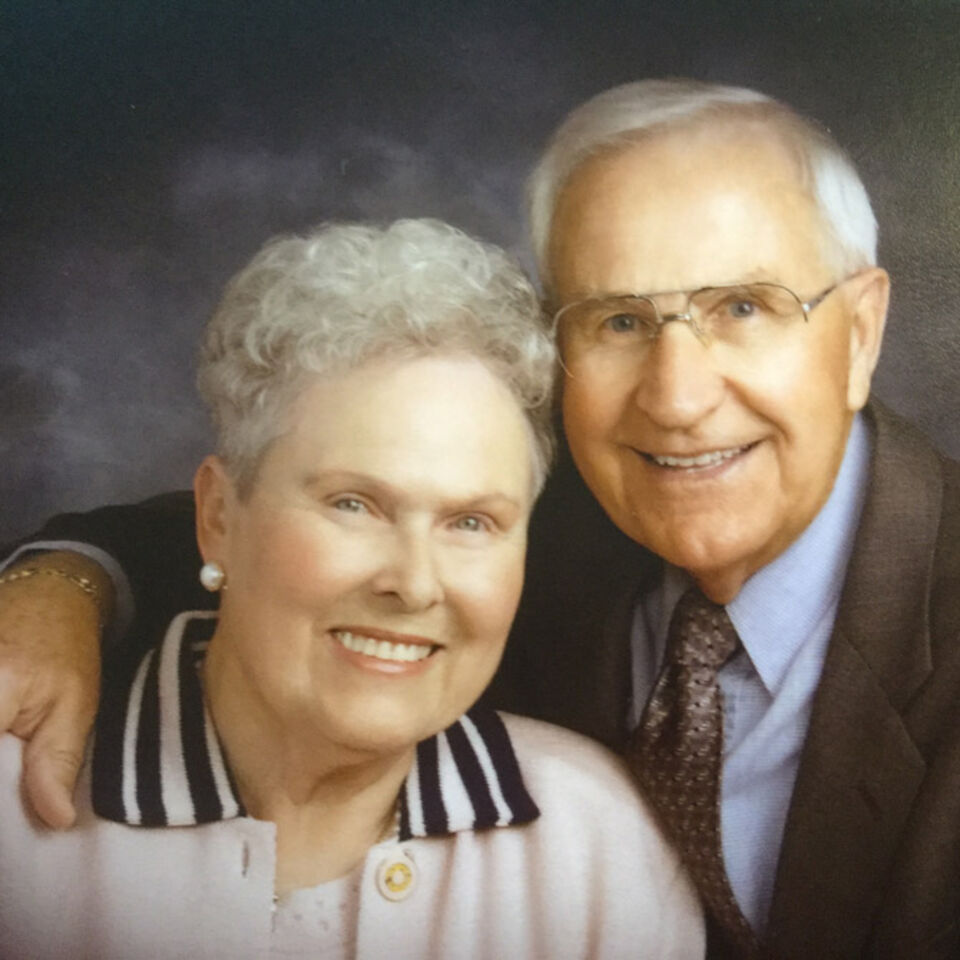 “Dad was very frugal about himself,” begins Janet Bryson fondly. “He had his shoes resoled until the day he died. Even though he was eventually the head of the largest construction company in Canada, he just didn’t spend money on himself. I mean,” she chuckles, “he drove a K-Car!”

Bryson, the daughter of Bob and Shirley Stollery and one of the Board of Directors of the Stollery Charitable Foundation (SCF), also remembers her mother just as lovingly. “She was a gentle, sweet soul who loved people. She could talk to anybody, anywhere and leave them feeling better about themselves.”

As part of the celebration of their 25th Anniversary, the Stollery Charitable Foundation (SCF) is proud to announce that they will be donating $750,000 over four years to Royal Inland Hospital Foundation. The money will go toward the Patient Care Tower’s new trauma inpatient unit, and is SCF’s largest donation in the Kamloops region to date.

Although they have both passed away, Bob and Shirley Stollery established SCF in Edmonton in 1994 to teach their family the value of giving back to their community and also in recognition of where they came from. SCF focuses on the needs of health, education, poverty alleviation and human rights.

“My dad grew up in the depression era,” explains, Janet. “He was one of six boys who slept in the attic (accessed by a ladder in the closet) of his one bedroom family home. My mom grew up in similar circumstances; they both knew what it was like to struggle. Dad did very well in his career, working his way up from field engineer at Poole Construction, to CEO. He then successfully transitioned it to PCL Construction, an employee owned company (one of the largest contracting organizations in North America). Through all this, my parents never forgot where they came from and the importance of giving back.”

Both retired public school teachers, Janet and her husband, Spencer Bryson (also a Foundation Board Director), have been long-time residents of Kamloops. “The ten volunteer directors rely extensively on the guidance of our Executive Director and the broad based knowledge of our President,” Spencer added. “We are all family members.”

The Brysons and their extended family are proud of the many ways that SCF has supported both the community and RIH in particular.

Beginning with its very first grant of $25,000, SCF has to date awarded 560 grants totaling $36 million to a wide range of not-for-profit organizations mainly in Edmonton that fit their mandate. In Kamloops, the Stollery Charitable Foundation has given over $7 million to 35 different agencies. RIH is one of the prioritized beneficiaries.

“Our local hospital has been one of the pillars of our Foundation from the get go,” says Spencer. “Our first grant to RIH Foundation was in 2001 and we have been pleased to support a wide variety of initiatives there. “This is a very natural partnership,” adds Janet. “Hospitals that can meet the needs of people where they live are especially important to our family and to our community.”

RIH is the third busiest hospital in the province when it comes to treating major trauma cases. While the exceptional RIH team currently provides great trauma care, the Patient Care Tower will allow RIH a great opportunity to centralize services that are currently dispersed throughout the hospital for enhanced team-based care.

“All aspects of the RIH expansion are compelling,” says Spencer, “but between the highways and railways that go through here and all of the recreational activities like boating and outdoor adventure, the needs for trauma care in Kamloops are significant. The medical team requires an efficient workplace - they deserve it - and we hope that the creation of a new, specialized trauma inpatient unit at RIH will help with that efficiency and will also attract more doctors to Kamloops.”

The Brysons are also excited to see what improvements to equipment can be made with their funding. Janet explains, “The technology is changing so quickly in this field; we want to help RIH have the best tools available to serve our area so patients can access high-quality care quickly when they need it most.”

“The generous donation from the Stollery Charitable Foundation to the Patient Care Tower Project will have a tremendous impact on how the hospital functions. Specifically, it will allow patients to receive concentrated care in an environment designed specifically for trauma cases; this is a new concept that we are very excited about,” commented Heidi Coleman, CEO of the Royal Inland Hospital Foundation.

The Brysons, along with some of the Kamloops not-for-profit organizations and charitable funders they have collaborated with, will hold a private, local reception this week to celebrate 25 years of improving lives.

True to their parents’ core values, example and instruction, the family behind the Stollery Charitable Foundation continues to prioritize the needs of those around them and takes great joy in knowing their contribution makes a huge difference in the lives of others.

“My dad taught us that money could be used for good or it can be very destructive; that’s why my parents wanted to make sure their whole family was actively involved in philanthropy,” says Janet. “This kind of donation is what my parents hoped for. It’s a once in a lifetime project and if we can contribute now it will be something that remains in place for many years to come. That kind of philanthropy is what we plan for many generations of our family.”