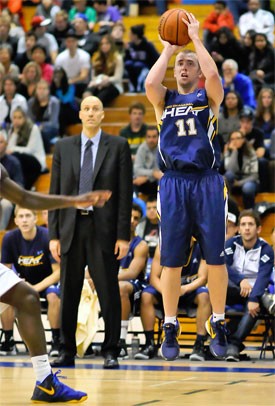 The UBC-Okanagan Heat basketball teams will come home empty handed after the University of Victoria Vikes swept both the men's and women's teams over the weekend.

Both squads were unable to overcome key injuries last night in Victoria.

After taking a seven point lead after one quarter, the Heat were outscored by 15 in the next two, and that proved to be the difference for the men in a 71-66 defeat.

Even though they found themselves without Yassine Ghomari and Kelowna's Mitch Goodwin, the Heat played well offensively.

Azi Fahandeg-Sadi (4th year, Kelowna) knocked down 19 points on 8-13 shooting, while Greet Gill (1st year, Osoyoos) added 17 points of his own as the Heat shot 45% from the field on the night.

Despite the offensive outpouring the Heat were out-rebounded 40-27, which led to 16 second chance points for the Vikes. This was the difference in the match for Victoria.

“Although leaving Victoria with a split would have been nice, we are encouraged by the focus and effort of tonight’s game,” says Heat Head Coach Pete Guarasci.

“I think we’ve learned how hard we need to play to be effective in this league.”

The women also had to battle through the injury bug after losing leading scorer and rebounder Roslyn Huber (5th year, Kelowna) to a high ankle sprain suffered in Friday night’s game. 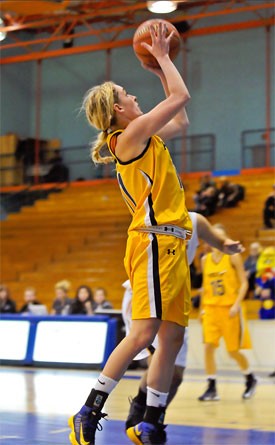 In the end, the Heat were unable to keep pace with the high powered Vikes, falling 83-52.

“We just could not hit a shot tonight,” says Melissa Irish.

“But we battled through adversity. The second half of tonight’s game is something we can draw on.”

The Heat shot 17% better from the field in the second half than in the first.

Both teams will look to get their first victory of the season next weekend when the Heat hosts the visiting Mount Royal University Cougars.

Friday’s games against the Cougars will mark the first meeting between the schools in CIS action as Mount Royal plays in its inaugural CIS season.