U-Vic too much for Heat hoopsters

The UBC-Okanagan Heat basketball teams opened the Canada West season on the road Friday night and both teams came up empty in front of a large and boisterous crowd at the McKinnon Gym in Victoria. 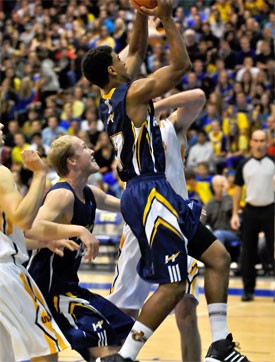 Photo: Contributed - Steve Shulhan
UBCO's Anwar Faza gets to the rim versus the Vikes Friday night.

The men could only muster 19 points in the second half, allowing U-Vic to coast to a 73-48 victory.

Kelowna Secondary graduate Azi Fahandeg-Sadi scored a third of UBC Okanagan’s points on the night, notching 16 on seven of 15 shooting.

The only other member of UBC-Okanagan to score in double-digits was fourth year player Ed Dane Medi, who put up 10.

Worse for the Heat was losing last year’s leading scorer, guard Yassine Ghomari, to a knee injury after only five minutes.

Heat coach Pete Guarasci wasn't pleased with his team’s lack of offense in the game, especially in the second half.

"(We) didn’t take care of the ball, and weren’t disciplined offensively. It was a great collective effort at poor execution," says Guarasci.

"Not executing offensively leads to difficult shots that are not open. Our execution offensively must improve and it will."

The Heat women opened their season with an 87-69 loss to the Vikes. 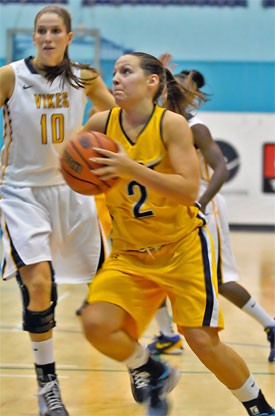 Photo: Contributed - Steve Shulhan
Vernon's Emily Kanester is in her second year and has earned a spot in the starting five.

Victoria stormed out of the gate, scoring 28 points in the first quarter and taking a lead from which the Heat wouldn't recover.

Kelowna's Roslyn Huber led the way for UBCO with 21 points and 11 rebounds in the game. Unfortunately for the fifth year post, she left the game in the fourth quarter with a leg injury, and her availability for Saturday’s game is in doubt.

Second-year guard Emily Kanester of Vernon chipped in with 10.

Heat Head Coach Heather Semeniuk was disappointed with the result but liked the way her team battled.

"(We were) down 14 at half but we lost each of the last two quarters by only two points. U-Vic is a good team and they shot the ball very well. We really struggled to get the defensive stops when we needed them.”

Victoria was led by fifth year guard Debbie Yeboah, who paved the way with an impressive 27 points.

“Tomorrow (Saturday) we need to keep working hard together as a team,” says Semeniuk as she looks for revenge in the second game of the double-header.