Vernon no match for Spruce Kings

Head Coach Dave Dupas mixed up his line combinations, taking Paul De Jersey off the powerful line that has led the Spruce Kings this year. De Jersey played with Gerry Fitzgerald and Jarryd TenVaanholt. Each of the new linemates scored, making Dupas look like a genius. 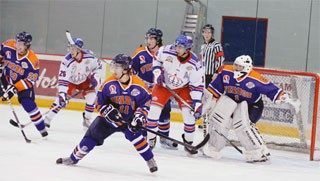 Meanwhile, Jujhar Khaira and Michael Colantone stayed together, mostly playing with Myles Fitzgerald. That move paid off, too, as Khaira scored twice, even though Colantone was largely invisible in this contest.

As Viper coach Jason Williamson noted after the game, the Vipers played with some intensity in the first and second periods, but fell asleep in the second. “We played an excellent defensive game last night against Westside, but tonight we just didn’t pay attention to detail, especially in the second.”

After PG’s Tyson Witala and Vernon’s Patrick McGillis traded goals in the opening 20 minutes, the Spruce Kings came out with a purpose in the middle frame, Jujhar Khaira tipped in a Chase Golightly point shot 39 seconds after the re-start.

Jarryd Ten Vaanholt (at 2:03) and Paul De Jersey (at 5:54) added to the lead as the two former Silverbacks set each other up. Late in the period, Danny Todosychuk, who could not be faulted on the previous goals, failed to hold a high shot on his chest and Zack Rassell swooped in to tuck it in.

Todosychuk had another bad moment early in the third when he lost sight of De Jersey’s clear-in. The puck bounced off the back boards through Todosychuk’s pads and Gerry Fitzgerald had an easy tap-in.

Ben Gamache made the score 6-2 with a shot from the right wing but, with four seconds remaining in the contest Jujhar Khaira out hustled a Viper defender to backhand a rebound past Todosychuk.

Prince George thus kept pace with Chilliwack, whose comeback victory versus Trail gave them 51 points. PG now has 49 points, while the Vipers are stuck at 43 points, which means that a victory in Sunday afternoon’s game in Prince George is critical for their playoff hopes.

The Vipers lost Brendan Persley after he was assessed a major penalty and a game misconduct for a check to the head of Trevor Esau at 6:09 of the second period. Persley will be suspended for the next two Viper games.