Tough season for the Heat

The UBC Heat women’s basketball team has returned from their preseason trip to Calgary, AB with an 0-3 record at the Ranger Elite Cougar Classic basketball tournament hosted by Mount Royal University. 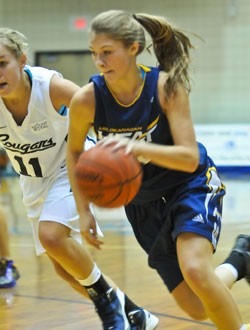 The Heat faced off against the host Cougars on Friday night and suffered a 66-60 loss.  Saturday night was a preview of the Heat’s Canada West regular season opening matchup, the University of Lethbridge Pronghorns.

Lethbridge proved to be a bit too much for the Heat and prevailed 72-59. Sunday morning the Heat played Montana State University and fought back from a large half-time deficit only to fall 68-60.

In the first half of the Friday night game against the Cougars the Heat were powered by post Krystal Schouten a second year from Winnipeg, MB, with 10 points, yet the heat trailed the Cougars 35-30. The second half had the Heat tie the score at 45 only to have the Cougars pull away to victory in the fourth. Guard Madison Kaneda a fourth year from Vernon,  scored 12 points in the game and Schouten finished with 11 points and six rebounds.

Saturday the Heat stumbled out of the gates trailing Lethbridge by nine at the quarter (23-14), only to tighten up their defense and go into the half trailing by four (36-32). The second half played out exactly like the first with the Heat losing the third quarter 22-10 to trail by 16 (58-42)and then fight back, but still fell 72-59.

Sunday morning the Heat really struggled to get the sleep out of their eyes as they were down 31-19 at the half to Montana State. The UBC Heat finally woke up and started hitting shots as they surged back into the game in the second half. The Heat would tie the game late in the third quarter, and then again narrowing the gap to one point (48-47) late in the fourth, before last minute fouls and threes from Montana State pushed the final score to 68-60.

The Heat’s comeback was led by freshman guard Emily Kanester from Vernon, who scored 18 of her game high 22 points in the second half, shooting 8/12 from the field and 3/5 from three in the game.

“We are just lacking in consistency and focus. Every quarter we would give up 20 points and score under 20, then at  the end of the game and we had lost by eight or 10. I think a good week of practice will help the girls clear their minds and refocus, if nothing else it will improve our cardio.”