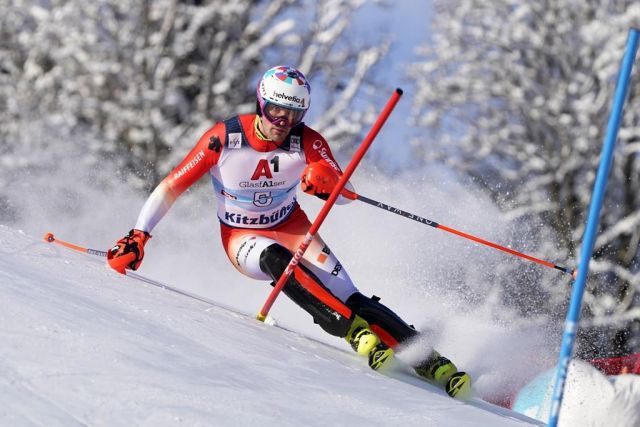 KITZBUEHEL, Austria (AP) — Daniel Yule reinforced what he called his “love affair” with Kitzbuehel by winning the men's World Cup slalom in the posh Austrian ski resort for a second time Sunday.

The Swiss slalom specialist ranked only seventh after the opening run, but he posted the third-fastest time in the second.

Yule then saw the top six fail to beat his leading time on the icy Ganslern course, including first-run leader Manuel Feller, who straddled a gate and failed to finish his home race.

“I really feel sorry for ‘Felli,’ he is doing so well, he is always attacking, and straddling is never nice. But I am very happy with my win, of course,” Yule said.

Dave Ryding, who triumphed last year to become the first British skier to win a World Cup race, posted the fastest time in the second run and improved from 16th to second place, 0.40 behind Yule.

Norway’s Lucas Braathen, who was runner-up to Feller in the first run, dropped to third, 0.41 off the pace. Linus Strasser of Germany was one-hundredth further back in fourth.

Eleven years to the day since making his World Cup debut at Kitzbuehel, Yule earned his second victory in the classic race following his maiden triumph in 2020.

“I raced my first World Cup event here. Somehow this is a love affair with Kitz,” Yule said. “I think as a ski racer, it would not be the same without Kitzbuehel. To win here twice is just incredible.”

It was Yule’s second win of the season, after triumphing in Madonna di Campiglio, Italy, last month. The Swiss skier remained the only non-Norwegian skier to win a men’s World Cup slalom in the 10 races since the Beijing Olympics.

Returning to the venue of his sole World Cup win so far, Ryding rediscovered his best skiing. The Briton had missed out on any top-10 results since his win last year and a second place at a slalom in Germany a few weeks later.

“I nearly stopped believing in myself this year, but I thought: ‘you know what, just go for it.’ And it helped," said Ryding, who was 1.56 seconds off the pace in the opening run.

“I changed my setup between runs. I had my flow, I had my rhythm back. Sometimes you need a kick in the a(asterisk)(asterisk), that’s what I got. I went all-in, really all-in,” said Ryding, who earned three of his six career podiums in Kitzbuehel.

“The atmosphere is so good, the piste is awesome. When it’s so good, you have to perform,” he said.

Henrik Kristoffersen, who won the classic slalom at Wengen last week, placed fifth after bouncing back from a disappointing opening run, which he finished 1.45 behind.

Braathen overtook Kristoffersen on the top of the season slalom standings and holds a slim lead of five points over his teammate. Yule is 36 points back in third. All three racers have won two events this season.

Feller was after his third career win and first in almost two years. His best result in Kitzbuehel remained fifth place in 2018, a year after record eight-time overall champion Marcel Hirscher was the last Austrian winner.

“Sure, it hurts. It’s a shame I didn’t even get a split time and couldn’t show what I can do,” said Feller, who lives in a village some 20 kilometers away from Kitzbuehel.

The slalom was the first of three technical races in Austria within four days, with a night slalom on Tuesday and a GS on Wednesday scheduled for Schladming.