Croatia boots Canada out of the World Cup, then kicks it when it's down 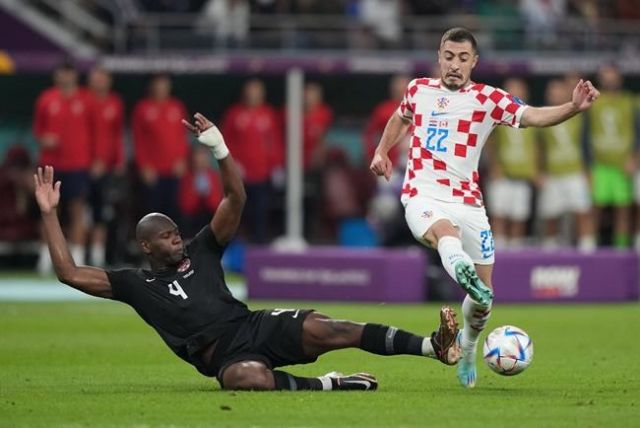 AL RAYYAN, Qatar — Croatia booted Canada out of the World Cup on Sunday, then kicked it when it was down.

While the Canadians still have one game left to play in Group F, Sunday's 4-1 loss to Croatia ended their hopes of advancing to the knockout round. John Herdman's men will go home after facing No. 22 Morocco on Thursday.

They will hope to leave on a winning note. But at 0-2-0 at the bottom of their group, the 41st-ranked Canadians can finish with no more than three points and cannot catch Morocco and Croatia, who have four points with one game remaining. Only the top two teams in each pool advance to the round of 16.

Morocco downed Belgium 2-0 earlier in the day. The second-ranked Belgians, who play Croatia next, have three points and are still in the hunt to advance.

Bayern Munich star Alphonso Davies made Canada history by scoring a beauty of a goal just 67 second into the match — the first ever by the Canadian men at the World Cup. Canada went 0-3-0 and failed to score in its first trip to the tournament, in 1986.

Runner-up to France four years ago in Russia, the 12th-ranked Croatian team are stocked with talent from top clubs and they rallied from the early 1-0 deficit to lead 2-1 at the break on goals by Andrej Kramaric and Marko Livaja in the 36th and 44th minute, respectively.

Kramaric added a second in the 70th before Lovro Majer rubbed salt in the wound in the 94th minute on a two-on-none attack.

Herdman, who antagonized the Croatian camp with a heated post-game message to his players after the opening 1-0 loss to Belgium, tried to see positives in Sunday's loss.

"I think we showed in that first 25 minutes that little old Canada can compete with the best on the world," he said. "I don't think we gave them an easy night tonight. They might be celebrating now and that's great. They deserved it. They scored four goals.

"There was a lot of pride in our performance," he added.

As there was on the other side of the pitch.

An emotional Herdman poured unwittingly gasoline on the fire in a pitch-side interview Wednesday following the Belgium loss when asked what he had said in a post-game huddle to his players.

"I told them they belong here and we're going to go and eff--- Croatia. That's as simple as it gets."

That sparked an immediate response from Croatian tabloids and a stern lecture Saturday from Croatian coach Zlatko Dalic about the need for respect.

Herdman maintained his message to the players was simply "to remind them that there's another task ahead." And he was quick to compliment Croatia, calling it a "top top top top football team."

But the damage had been done. Perhaps fittingly, Canada wore all black Sunday.

Dalic was asked after the match if he had had a chance to shake hands with Herdman.

“I did not see the other head coach after the match," he said through an interpreter. "When I lose … I always congratulate the winner. He was not there and that’s his way of doing things. He’s obviously mad. He is a good coach. He is a high-quality professional. But it will take some time for him to learn some things.”

A sly smile crossed Kramaric's face when he was asked about Herdman's heated words before the game.

"I have to say thanks to the head coach of Canada for the motivation," he said through the interpreter. "I do believe that he could have chosen better words to express himself. He could have formulated it a bit differently.

"In the end Croatia demonstrated who eff-ed whom (with) what we did."

Asked after the game if he regretted the comment, Herdman initially demurred,

"No, not at all, there's a respect there for Croatia. And as I keep saying, we're here to push as far as we can as a team. We're here to change the mentality of the group."

Then he changed gears.

"I could have been a little bit more composed coming out of the huddle," he allowed. "But that's my learning. I'll take that on the chin."

Canada started with a bang with a Milan Borjan goal kick finding Cyle Larin at midfield. Larin controlled the ball deftly with his foot and sent it over to Tajon Buchanan down the right flank. Buchanan surged ahead, took two touches, lifted his head and sent in a cross that Davies, soaring through the air high above fullback Josip Juranovic, headed home past goalkeeper Dominik Livakovic.

"It was a great start and a proud moment, I think for the fans in the stadium and the people back home," said Herdman. "We got to celebrate something that we've been waiting a long time for."

The tac-tac-toe goal was 36 years in the making — a score worthy of Canada's first at the men's soccer showcase. Davies' teammates mobbed the 22-year-old from Edmonton by the corner flag and the entire country celebrated.

Perhaps a little too soon.

It marked Davies' 13th goal for Canada — and the first with his head — in 36 appearances. And it no doubt helped make up for his missed penalty in the loss to Belgium.

But Croatia regained its composure and, using its precision, took over the midfield and began to open up the Canadian defence.

But for a while, it was all Canada with the Canadians in the crowd of 44,374 chanting "This is our house" after the Davies goal.

Davies was feeling it, nutmegging Brozovic in the 22nd minute as the Canadians stroked the ball around the immaculate pitch at the Khalifa International Stadium.

Then the tide turned.

Kramaric scored in the 36th minute, taking a pass from Ivan Perisic that went through Alistair Johnston's legs. The Hoffenheim forward then cooly beat Borjan, from an acute angle, with a well-placed left-footed shot to the corner of goal.

Kovacic had a hand in the goal, faking out Stephen Eustaquio to make room for the pass to Perisic.

Livaja put Croatia ahead in the 44th minute after a slashing run by Juranovic carved open the Canadian defence. The Croatian right back beat Davies to start his run and, after a fortunate bounce in traffic, slotted the ball between Steven Vitoria's legs to Livaja, whose shot went past the outstretched arm of a diving Borjan.

For Herdman, that goal was the game-changer. Canada was forced to change tactics and chase the match, with Croatia "clinical in transition."

Canada had to substitute an ailing Eustaquio at halftime. The influential FC Porto midfielder has been dealing with a hamstring injury all tournament and was unable to continue, signalling in the 35th minute that he was struggling.

Herdman called it a turning point, saying Eustaquio is "a massive player for Canada."

Kramaric made it 3-1 in the 70th minute, elegantly shifting the ball away from Kamal Miller to make room for a left-footed shot through Canadian captain Atiba Hutchinson's legs. Tottenham's Perisic again played provider.

The stadium echoed with "O Canada," with the Canadian section in the stands belting out the lyrics. And Davies quickly turned up the volume. But by the second half, it was the Croatian end that was making all the noise.

The Canadians have misfired more often than not in the first two games here, launching 29 shots, only five of which were on target.

Hutchinson marked his 100th appearance for Canada, 19 years after his senior debut.

The 39-year-old from Brampton, Ont., is the oldest outfield player at the tournament and the second-oldest ever to feature at the World Cup finals after Cameroon's Roger Milla (42 years 29 days in 1994).

Herdman praised his skipper, who had seen limited action before the tournament due to a bone bruise suffered in pre-season with Besiktas. He said he asked Hutchinson about the 55th minute if he wanted to continue.

"He said he just wanted to keep going … And you need leadership when you think you're bringing young players in like (Ismael) Kone," Herdman said.

Croatia, meanwhile, has lost just one of its last 18 outings (12-1-5). Croatia was beaten 3-0 by Austria in June in UEFA Nations League play — a loss they avenged in September with a 3-1 win.

This report by The Canadian Press was first published Nov. 27, 2022