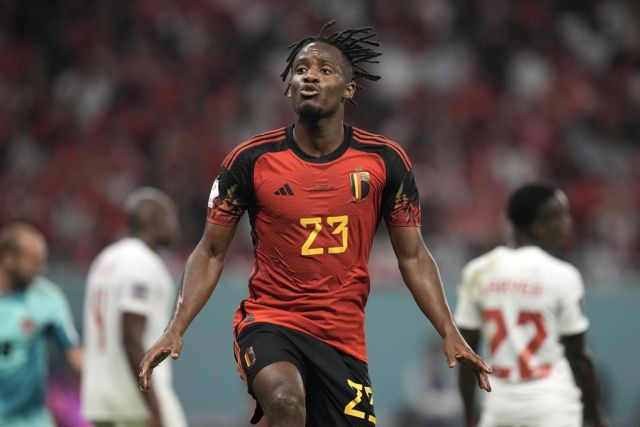 AL RAYYAN, Qatar (AP) — Kevin De Bruyne threw his hands up in disgust as another pass went astray. Eden Hazard was easily knocked off the ball. Michy Batshuayi was hauled off by his angry coach after a lazy flick to no one at all.

Belgium didn't live up to the hype of being the second-ranked team despite starting the World Cup with a 1-0 victory over Canada on Wednesday.

Thibaut Courtois saved an early penalty and Batshuayi scored the only goal at Ahmad Bin Ali Stadium to spoil the North American team's return to the tournament after 36 years.

Aside from the result, there was little for the Belgians to celebrate, with De Bruyne — one of the world's best players — mocking the decision to name him player of the match.

“No, I don't think I played a great game,” a miserable-looking De Bruyne said after being told of his award. “I don’t know why I got the trophy — maybe it's because of my name.”

Belgium's aging team was outplayed at times by Canada, which has yet to collect a point or even score a goal in four World Cup matches — including the three games from its debut in 1986.

This should have been the game the Canadians broke that run. Alphonso Davies, the star of Canada’s team, squandered the best chance when his penalty was blocked by Courtois, one of 21 shots taken compared to Belgium's nine.

“They showed tonight they do belong here,” Canada coach John Herdman said of his players.

One moment of class in the 44th minute wound up deciding the game. It wasn't from one of De Bruyne's brilliant through-balls or Hazard's mazy dribbles, but instead a simple long ball over the top of Canada's defense by center back Toby Alderweireld.

It split the defense and Batshuayi ran through, letting the ball bounce twice before guiding a left-footed finish into the far corner.

“Delighted that, without being ourselves, we won the game,” Belgium coach Roberto Martinez said.

Martinez said it was his team's worst performance on a technical level since he took charge more than six years ago.

There were six players in their 30s in Belgium’s starting lineup, four of them having accrued more than 100 international appearances. Courtois and De Bruyne might reach three figures at this World Cup, in what looks like being a last hurrah for this group of players often described as a “golden generation.”

The absence of Romelu Lukaku — a prolific scorer and big presence up front — is a huge blow to Martinez, with Batshuayi failing to impress as his backup aside from his well-taken goal.

Lukaku, who has a left thigh injury, could potentially miss the entire group stage.

With De Bruyne's passing unusually poor, all the best moves came from a mobile and attacking Canada team in front of their loud, Maple Leaf-waving fans.

Davies stood out with his driving runs from left back but ruined his performance with his failure from the spot. Herdman had no complaints about Davies taking the kick, even though Jonathan David typically takes them for French club Lille.

“It’s a big moment for any player. You are carrying the weight of a nation,” Herdman said. “When you have an $85 million player, let him pick the ball up and take it.”

Canada had 14 shots in the first half alone, the most by a team at the World Cup without scoring in 16 years.

Canada captain Atiba Hutchinson, at the age of 39, became the oldest outfield player to start a World Cup match.

The referee was Janny Sikazwe of Zambia, who made headlines at the African Cup of Nations in January by blowing to end a match after about 85 minutes. The match restarted and then ended again prior to the 90-minute mark. Sikazwe later said he had been suffering from heat stroke. In the Belgium-Canada game, he played five minutes of stoppage time in each half.

Belgium takes on Morocco on Sunday. Canada meets Croatia on the same day.

Steve Douglas is at https://twitter.com/sdouglas80