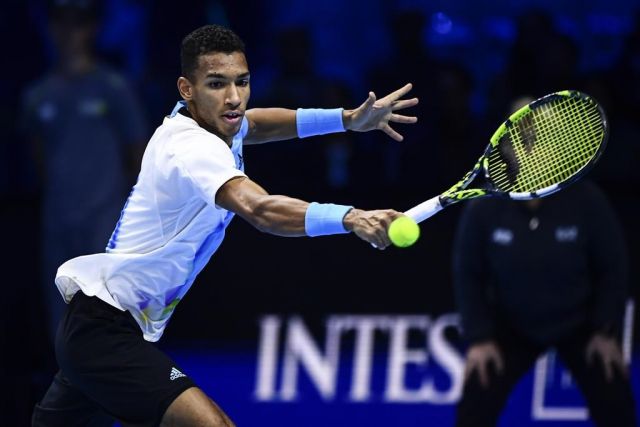 After a loss to Norway's Casper Ruud to open his first career appearance at the season-ending ATP Finals, Auger-Aliassime regained his scorching end-of-season form with a 6-3, 6-4 win over top-seeded Rafael Nadal in round-robin play.

“I wasn’t sure If I would be here one day or if I could only dream of it," Auger-Aliassime said of defeating the Spanish legend for the first time.

“The age difference is huge, and it proves what a champion he is and what an example because he is still here at 36, battling against guys in their young 20s. He is a great champion and has a great attitude."

Auger-Aliassime, seeded fifth in the season-ending men's championship, used his dominant serve to wear down Nadal.

The 22-year-old Canadian was good on 81 per cent of his first-serve points and fired 15 aces, including one on his first point to set the tone.

Auger-Aliassime took advantage of some uncharacteristically loose play by Nadal to score a break in Game 8 of the first set. Leading 40-love, Nadal committed two consecutive double faults to give Auger-Aliassime a lifeline.

Nadal recovered to take advantage after Auger-Aliassime tied the game at 40-all, but the Canadian took three straight crucial points to open up a 5-3 first-set lead. Serving for the set, Auger-Aliassime held with little trouble to go up 1-0.

Auger-Aliassime put the pressure on Nadal early in the second set, scoring a break to go up 2-1. The two traded holds for the rest of the match, with Auger-Aliassime winning on his first match point on serve when Nadal sent a return into the net.

The win evened Auger-Aliassime's round-robin record to 1-1 after the Canadian dropped Sunday's opener 7-6 (4), 6-4 to Ruud.

Auger-Aliassime will next meet eighth-seeded American Taylor Fritz, who lost 6-3, 4-6, 7-6 (6) to Ruud later Tuesday. The result confirmed a semifinal berth for the 23-year-old Norwegian and eliminated Nadal (0-2).

The winner of Thursday's match between Auger-Aliassime and Fritz will join Ruud in the semifinals. Fritz beat Auger-Aliassime 6-7 (6), 6-4, 6-4 at the season-opening ATP Cup in Australia in the only other meeting between the young stars.

"I'm one win, one loss now. If I can get two wins, hopefully I can get through, so let’s see how it goes,” Auger-Aliassime said. “I will be ready for Taylor in two days. It won't be easy. He has been playing really good this year and these conditions are perfect for him."

It was the Montreal native's first career win over the 22-time Grand Slam champion. Nadal had beaten Auger-Aliassime twice previously, including a gruelling five-set decision at the French Open in May.

Auger-Aliassime earned his way into the elite season-ending event in Turin, Italy, thanks to an impressive 16-match win streak, which led to wins in three of the final four ATP Tour events of the year.

The Canadian credited his coach Toni Nadal, the uncle and ex-coach of Rafael Nadal, for his recent success.

"He has been a great help to me. I have a ton of respect for him and his family. It is special to play Rafa with Toni here, but at the same time we are competitors, and we try our best," said Auger-Aliassime.

Milos Raonic of Thornhill, Ont., is the only other Canadian to ever qualify for the ATP Tour World Finals, having played in the event in 2014 and 2016. Raonic lost in the semifinals in 2016 and lost both of his matches in 2014.

This report by The Canadian Press was first published Nov. 15, 2022.