Bengals reverse fortunes in 1st win with short week ahead 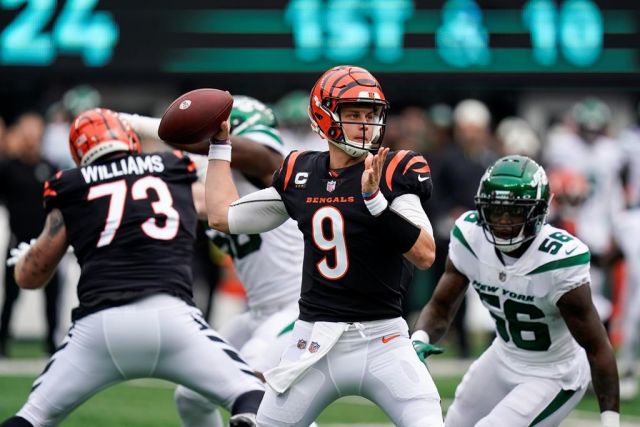 CINCINNATI (AP) — Last week, the winless Cincinnati Bengals talked about how the offense needed to start faster, and the defense wanted to create more turnovers.

They made good on both accounts Sunday in a 27-12 road win over the New York Jets.

The Bengals won the coin toss and took the ball first instead of deferring as they usually would. Joe Burrow then directed a drive capped by a 12-yard touchdown pass to Samaje Perine, and Cincinnati would score on three of the next four possessions to take a 20-9 lead into halftime.

After losing their first two mistake-filled games by a combined six points, the Bengals needed to start getting things right. And, for the most part, they did. Play-calling was more diverse, and Burrow took downfield shots looking for explosive plays. After an early rough patch, Burrow again looked like the quarterback that took Cincinnati to the Super Bowl last season.

"We came out aggressive and it paid off for us," said Burrow, who was 23 for 36 for 275 yards and three touchdowns. Ja'Marr Chase and Tyler Boyd also caught TD passes.

“We just needed to get the first win,” Cincinnati coach Zac Taylor said. “I didn't really care what it looked like. I really didn't care whether it was 3-0 or 49-3. We just need to rip that Band-Aid off, get that first win. We've been a confident team all along.”

“We treated it as this being the start of our season,” defensive end Sam Hubbard said. “The 0-2 start was behind us. The start of our new season was today. That was our message coming into today.”

The offensive line kept Burrow from getting sacked more than twice, but couldn't break open the running game. Joe Mixon averaged just 2 yards per carry (12 for 24 yards) before giving way to Perine, who picked up 47 yards on nine carries.

Boyd, who can be overshadowed by fellow receivers Chase and Tee Higgins, caught four of his five targets for 105 yards. Boyd turned in the most exciting play of the day when he grabbed a short pass from Burrow, bounced off two defenders and romped for a 56-yard touchdown late in the first quarter.

Rookie left guard Cordell Volson's holding penalty nullified a 4-yard Burrow-to-Boyd TD pass in the first quarter. Volson, who won the job in training camp, is one of four new starters on the offensive line.

Mixon didn't play for much of the fourth quarter because of a sore ankle. ... DT D.J. Reader was lost for the game in the second quarter with a left knee injury. There were no details on their availability for Thursday night's game.

The Bengals will try to maintain the momentum and positive vibes through a short week as they prepare to host the 3-0 Miami Dolphins on Thursday night at Paycor Stadium. The Dolphins beat the previously unbeaten Buffalo Bills 21-19 on Sunday.