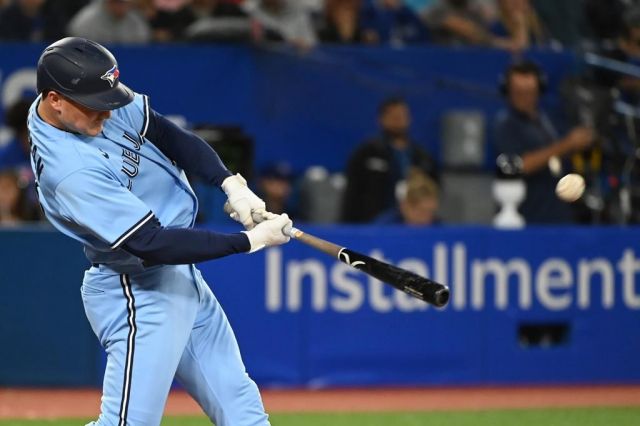 TORONTO — Matt Chapman feels that he's put the ups and downs of his season behind him. At least, for one night.

Chapman had a solo home run and a two-run homer to lift the Toronto Blue Jays over the Baltimore Orioles 6-3 on Friday in the opener of a three-game series. The two dingers snapped a 25-game drought for the Toronto third baseman that dated back to Aug. 20.

"To be able to have a game tonight where I felt like I was in control, able to find the barrel consistently, is a good sign," said Chapman. "And we've got our most important baseball left to play.

"For me to be able to take good at bats and help this team is huge."

The three-game series against the Orioles could be pivotal for the Blue Jays' post-season hopes. Baltimore is chasing Toronto, the Tampa Bay Rays, and the Seattle Mariners for one of the American League's three wild-card spots.

Friday's win in the series opener put Baltimore six games back of the Blue Jays in the standings and 4 1/2 back of Tampa Bay.

"Any opportunity we can get to gain a game, separating ourselves from Baltimore or putting the pressure on the teams that are right there in the mix with us is huge," said Chapman. "The series is definitely important because if we keep taking care of business it just gives us more space."

Interim Blue Jays manager John Schneider was forced to make Friday a bullpen game as Toronto played six games in five days. That plan was complicated when Trevor Richards gave up five runs on 29 pitches in just 2/3 of an inning in the Blue Jays' 11-0 loss to the Tampa Bay Rays on Thursday.

Richards, who served as the so-called opener for Friday's game, seemed to have no ill effects from the previous night's outing, striking out all three batters he faced in the first inning.

"They were unbelievable. I can't really say enough about what they did," said Chapman of his bullpen's performance. "It's hard to do what they did and they all stepped up. It was awesome."

Adley Rutschman had a two-run homer in the fourth as Baltimore (75-68) briefly held the lead. Gunnar Henderson hit a home run with two outs in the ninth inning.

Chapman got Toronto on the board in the second inning, launching a Lyles fastball to deep left field.

Cedric Mullins led off the fourth inning with a triple before Rutschman hit his 11th home run of the season in the next at bat for a 2-1 Baltimore lead.

Springer answered back for the Jays in the fifth, sailing a Lyles curveball 412 feet into the second deck in left field. He brought home Chapman and Raimel Tapia with his 21st home run.

Chapman piled on in the sixth with his second home run of the night. He took a Krehbiel change-up deep, cashing in Bichette for a 6-2 lead. Bichette had reached base with a single to extend his hit streak.

Garcia got two quick outs in the ninth inning before Henderson hit his second homer of the season for the game's final score.

LONG MEMORIES — Fans at Rogers Centre loudly booed Orioles second baseman Rougned Odor whenever he came to the plate. Blue Jays fans still hold animosity toward Odor from his time on the Texas Rangers when he sparked a benches-clearing brawl with Toronto by punching a surprised Jose Bautista in the face.

KIRK AND GURRIEL — Schneider said before Friday's game that catcher Alejandro Kirk and outfielder Lourdes Gurriel Jr. would resume baseball activities. Kirk didn't play against Tampa on Thursday due to tightness in his left hip. Gurriel is scheduled to come off the 10-day injured list on Sunday but Schneider said he may need more time.

ON DECK — José Berríos (10-5) gets the start for the Blue Jays on Saturday at 3:07 p.m. ET in the second game of their three-game set against Baltimore. Kyle Bradish (3-6) will take the mound for the Orioles.

This report by The Canadian Press was first published Sept. 16, 2022.