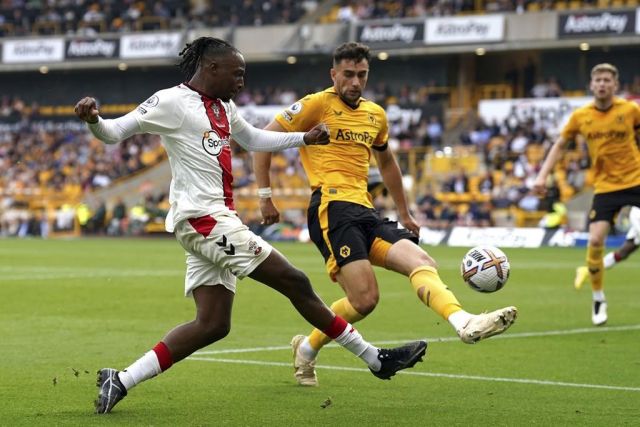 A look at what’s happening in European soccer on Friday:

The Premier League resumes after a two-week break prompted by the death of Queen Elizabeth II, who will be the subject of tributes in matches between Aston Villa-Southampton and Nottingham Forest-Fulham. There will be a minute’s silence before the games followed by the national anthem, while fans will be invited to applaud at the 70-minute mark in recognition of the queen’s 70-year reign. The entire round of games last weekend was called off as a mark of respect for the monarch. Villa has only won one of its first six games though did ease the pressure on manager Steven Gerrard by recovering to draw against Manchester City in its last match. Forest and Fulham know each other having been in the Championship together last season. Fulham striker Aleksandar Mitrovic is looking to score for a fifth straight game.

Cádiz visits Valladolid in desperate need of a win to kickstart its season. The team from southern Spain is in last place after losing all five of its matches played. To make matters worse, Cádiz has yet to score a single goal while conceding a league-worst 14 times. Coach Sergio González says that the trip north to Valladolid is critical to starting a turnaround. Valladolid was recently promoted and should also be fighting to avoid relegation this season. “We have run out of excuses,” says González.

It’s an all-southern matchup when Serie B champion Lecce visits a Salernitana team that is in 10th place with only one loss. Lecce is in 17th place and is yet to produce a win in its latest top-division campaign. Senegal forward Boulaye Dia has scored three goals and provided two assists in five appearances for Salernitana this season. Former Italy midfielder Antonio Candreva has also played well for Salernitana. A young Lecce squad features nearly 20 players born in the year 2000 or later.

Hertha Berlin coach Sandro Schwarz returns to former team and hometown Mainz looking for what would be just his second Bundesliga win of the season with Hertha. But Hertha hasn’t beaten Mainz in six attempts. Its last win over Mainz came in March 2019, when Schwarz was Mainz coach. The 43-year-old has come to Hertha via a stint in charge of Dynamo Moscow and has overseen some positive performances so far — albeit with only one win from six games in the league. Counterpart Bo Svensson also has room for improvement — Mainz is yet to score a goal at home this season.

Lorient has made its best start ever in the top flight and can move up to third place with a win at Auxerre. Nigeria striker Terem Moffi is carrying Lorient's attack again and has five league goals so far. Auxerre won the league in 1996 but was promoted last season after falling on hard times. A win would move Auxerre into mid-table.