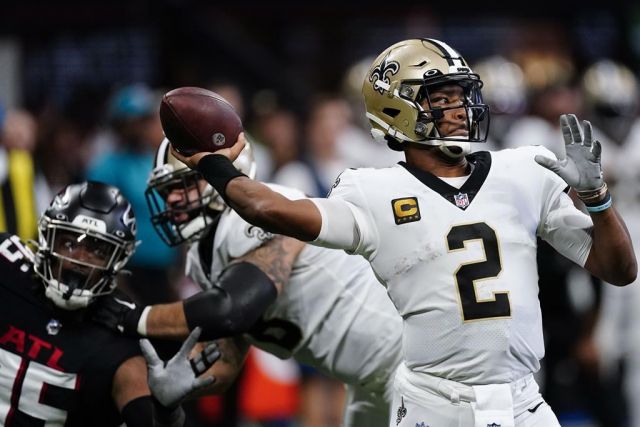 OPENING LINE: Buccaneers by 2 1/2, according to FanDuel SportsBook.

BUCANNERS PLAYER TO WATCH: With Tom Brady turning 45 during training camp and playing behind an offensive line featuring two young players who made their first NFL starts last week, the Bucs relied heavily on the running game in their season-opening win at Dallas. RB Leonard Fournette rushed for 127 yards, a personal best in a regular-season game since signing with Tampa Bay in 2020. He also had two receptions for 10 yards.

SAINTS PLAYER TO WATCH: WR Jarvis Landry was major contributor in his Saints debut, catching seven passes for 114 yards, highlighted by his acrobatic 40-yard reception in the final minute of the game to help set up the winning field goal.

KEY MATCHUP: Fournette vs. the Saints' defensive front. New Orleans, which ranked fourth against the run a season ago, had an uncharacteristically difficult game in Week 1 against Falcons running back Cordarrelle Patterson and mobile QB Marcus Mariota, New Orleans allowed 201 yards rushing, with Patterson becoming the first 100-yard rusher against the Saints in more than a season.

KEY INJURIES: Bucs WR Chris Godwin returned last week — eight months after undergoing surgery to repair two knee ligaments he tore against the Saints last December. However, he left the opener with a hamstring injury. The Bucs say the injury does not appear to be as serious as initially suspected, but his status for Sunday remains uncertain. LT Donovan Smith (hyper-extended elbow) began the week on the injury report and could be a game-time decision. ... Saints CB Paulson Adebo missed practice this week with an ankle injury that kept him out in Week 1. ... RB Alvin Kamara was limited in practice by a rib injury that caused him to go to the locker room before the end of last week's game. ... WR Tre'Quan Smith, who was scratched in Week 1 because of a shoulder injury, returned to practice this week.

SERIES NOTES: The Saints have won all four regular-season matchups since Brady left New England for Tampa Bay in 2020, but the Bucs won the lone playoff meeting two seasons ago in New Orleans. ... The Saints have intercepted Brady eight times in the past four regular-season meetings combined. ... Saints QB Jameis Winston was drafted first overall by Tampa Bay in 2015 and played his first five seasons with the Bucs. ... Winston's first start against the Bucs came last Halloween, when Winston went down with a season-ending knee injury early in the second quarter. ... New Saints coach Dennis Allen served as the Saints' interim head coach for New Orleans' victory at Tampa Bay last December, when the since-retired Sean Payton remained home because of a positive COVID-19 test.

STATS AND STUFF: Tampa Bay’s defense was dominant last week, limiting the Cowboys to 244 yards and three points. Dallas drove to the Bucs Bay 31 on its first drive of the game, settled for a field goal, and didn’t come close to scoring again. It’s the fewest points the Bucs have allowed in Week 1 since 2003. ... Brady threw for 212 yards, one touchdown and one interception. In 18 road games with the Bucs, he’s thrown for 5,557 yards and 44 TDs vs. 11 interceptions. ... WR Julio Jones made his debut with the Bucs last week. He spent nine of his first 10 pro seasons with the Atlanta Falcons and has 102 receptions for 1,615 yards and three TDs in 18 career games against the Saints. ... Bucs WR Mike Evans had a TD catch against the Cowboys. He leads the league with 76 TD receptions since entering the NFL in 2014. ... The Bucs have allowed a league-low 82.3 yards per game on the road since the start of the 2019 season. ... The Saints' 201 yards rushing allowed at Atlanta last weekend was more than they allowed in all but one game last season. ... Winston passed for 269 yards and two TDs without an interception last week, giving him 16 TDs against three INTs in eight career starts for New Orleans. ... Saints DE Cameron Jordan had two sacks and a forced fumble in the previous meeting and had a sack in both meetings last season. ... Second-year LB Pete Werner led the Saints with 12 tackles and had his first-career forced fumble last week. ... TE Taysom Hill, who also lines up at QB periodically, rushed four times last week for 81 yards, including one run of 57 yards and an 11-yard TD.