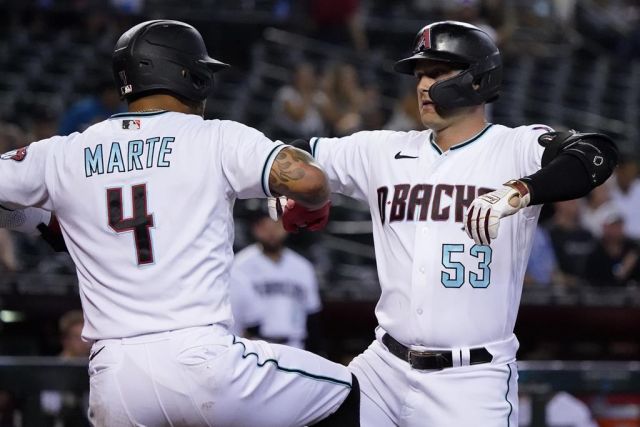 PHOENIX (AP) — After a few years of floundering at or near the bottom of the NL West, the Arizona Diamondbacks are starting to look like a pretty good baseball team.

Christian Walker hit a two-run homer, Merrill Kelly pitched seven stellar innings and the D-backs beat the Milwaukee Brewers 5-0 on Thursday night for their sixth win in the past seven games.

It continues a roll they've enjoyed for the past six weeks. They're 22-16 since the All-Star break and have moved into third place in the division, passing the Giants and Rockies.

That might not seem like much, but for a team that lost 110 games last season, it's a vast improvement.

“If we play the way we’re playing right now, we can be a good team," Kelly said. “I think if we finish the year this last month and kind of bear down and play the way that we’re playing, it’ll leave a good taste in everybody’s mouth coming back for next year and moving forward.”

Walker hammered his 31st homer to deep left in the first inning off Milwaukee's Brandon Woodruff, giving the D-backs a 2-0 lead. Geraldo Perdomo's RBI single in the third pushed the advantage to 3-0 and Josh Rojas smashed a two-run double high off the center field wall in the sixth to make it 5-0.

“It's a lot of little things are taking place inside of each at-bat," D-backs manager Torey Lovullo said. "It's a stubborn approach. It's an all-field approach. We can turn on the baseball and drive it and we're fairly unpredictable. We don't shut down and we're moving in the right direction."

All five runs came with two outs and Rojas' double chased Woodruff (9-4) from the game. The right-hander gave up five earned runs on eight hits over 5 2/3 innings. He walked two and struck out four.

“I didn't quite have my good stuff tonight," Woodruff said. “So it was kind of a battle.”

While Arizona's offense was methodical, Kelly (12-5) was dominant. The right-hander flashed the form that made him NL Pitcher of the Month in July, giving up only four hits and no walks while striking out seven. Caleb Smith closed the game with two scoreless innings of relief.

Milwaukee slipped to 69-61 and fell to 6 1/2 games behind the St. Louis Cardinals for the top of the NL Central. Jace Peterson led the Brewers with two hits.

Counsell said that after the Brewers failed to capitalize on a few offensive opportunities in the first couple innings, there wasn't much the offense could do against Kelly.

“He's having a great year, he's been pitching really well,” Counsell said. “In the first inning, we got in some good counts with three or four guys, but couldn't do anything with that. In the second inning, he got better. Then he got locked in. That's what a good starting pitcher does.”

Milwaukee's Christian Yelich left the game after the third inning because of what the team called neck discomfort. He was replaced by Tyrone Taylor.

“Irritated his neck on one of his swings in that second at-bat,” Counsell said. “He's day to day.”

Counsell added that there's “a chance that he misses a couple days, but I wouldn't worry about it past that.”

Brewers: OF Esteury Ruiz and RHP Luis Perdomo were promoted from Triple-A Nashville.