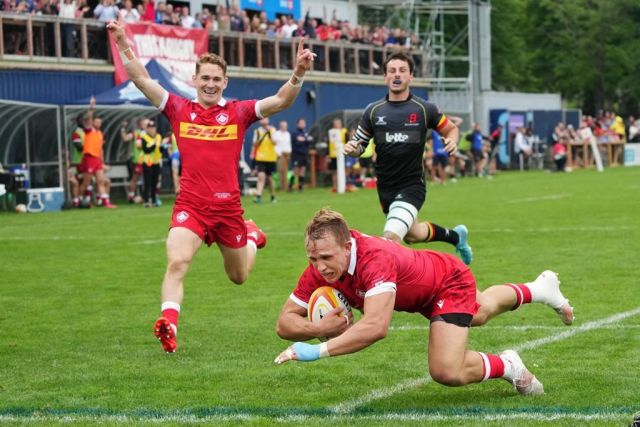 HALIFAX — Canada cruised to a 45-0 win over the visiting Belgians on the rugby pitch Saturday afternoon in front of 4,412 fans who gathered in the heart of Nova Scotia’s capital city to take in the international action despite grey skies and the looming threat of rain.

Irish-born Jason Higgins got the Canadian men’s rugby team on the board early with the first try of the game, receiving the ball deep inside the offensive half, breaking a tackle, and running it in to ignite the momentum for the home country, much to the enjoyment of the fans in the stands, many still decked out in red and white after Canada Day festivities.

Peter Nelson added the conversion with a kick through the posts to make it 7-0 within the first seven minutes of the game.

“It’s really surreal when I think about it. I’m kind of lost for words,” said the 25-year-old Coats of playing in front of a stadium full of personal cheerleaders.

“To be able to score, to be able to play the whole game in front of my family and friends, and just hear them in the stands the whole time, is just absolutely incredible. I’m so glad to have grown up here.”

Coats also emphasized that Saturday afternoon’s success in Halifax is a confidence boost for the Canadian crew as it heads into next Sunday’s match (at TD Place in Ottawa) against tough opponent Spain, ranked No. 15 in the world.

Also on Saturday, Matthew Oworu of Calgary, Lindsey Stevens who originally hails from Sydney, Australia, and Dawson Fatoric of Ottawa all made their national team debuts when they came on as substitutes during the second half in the match against Belgium.

Saturday’s rugby showdown was the first time in almost eight months that the team has come together for a match. The last time the Canadians came together on the pitch for international play was also against the Belgians, last Nov. 13 in Brussels. Canada blanked the No. 26-ranked Belgium 24-0 in that match. Canada entered Saturday’s match ranked 21st globally.