Kvitova feels the nerves, but reaches 3rd round at Wimbledon 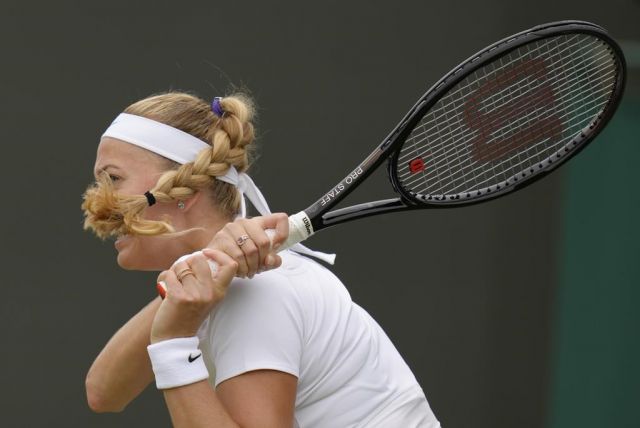 WIMBLEDON, England (AP) — Petra Kvitova has plenty of experience on the grass courts of Wimbledon. After all, she’s a two-time champion at the All England Club.

But that doesn’t mean everything is easy for her once she steps onto the green courts in southwest London.

She has spoken about being nervous when she comes to Wimbledon, and she showed some of those nerves on Thursday when she beat Ana Bogdan 6-1, 7-6 (5).

It was a straight-set victory, but the second set wasn’t straightforward.

Kvitova was leading 5-1 when Bogdan started to reel off game after game. Then Kvitova had a match point while serving at 5-4, but failed to convert that chance and then the game itself, eventually leading to the tiebreaker.

“Especially a few games on my serve, it was really long games, and mentally very tough,” the 25th-seeded Kvitova said. “I think maybe even this took some energy from my serve and I just couldn’t make it.”

She still pulled it out in the end, like she has done so many times in the past at Wimbledon. She won her first title in 2011, and added the second in 2014. But she was attacked in her home in 2016 and suffered knife injuries to her playing left hand. She later had surgery and needed more than five months to recover.

Last week, she won the fifth grass-court title of her career at a tournament in Eastbourne, England.

That should have given her plenty of confidence heading into this tournament, and this match.

Nick Kyrgios advanced to the third round for the sixth time in eight Wimbledon appearances. The unseeded Australian, who reached the quarterfinals at the All England Club in his debut in 2014, beat 26th-seeded Filip Krajinovic 6-2, 6-3, 6-1.

It was a much easier match than the first round, when Kyrgios was taken to five sets by British wild-card entry Paul Jubb.

“Getting over the line in that first round was massive,” Kyrgios said. “Today I was kind of in my zone. I just wanted to remind everyone that I'm pretty good.”

No. 11 Taylor Fitz of the United States also advanced, along with No. 21 Botic van de Zandschulp of the Netherlands and Richard Gasquet of France.

No. 17 Roberto Bautista Agut of Spain withdrew from the tournament after testing positive for COVID-19. He had been scheduled to play Daniel Elahi Galan of Colombia.