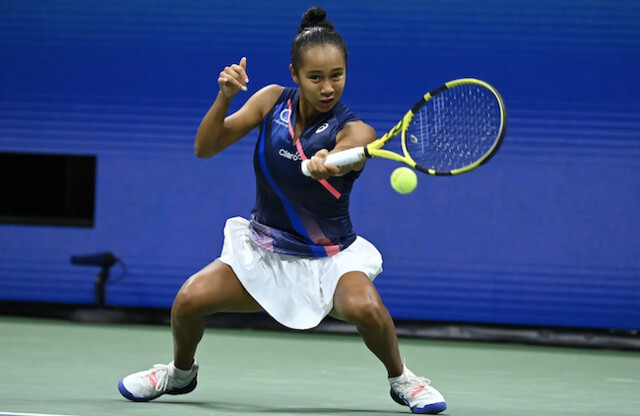 Leylah Fernandez, of Laval, Que., fought back from an early 4-1 first-set deficit to narrowly defeat Aryna Sabalenka of Belarus 7-6(3), 4-6, 6-4, securing her first-ever shot at a Grand Slam title.

The 19-year-old fan favourite got off to a slow start in Thursday's semifinal match, struggling at first to even make contact with the No. 2 seed's blistering pinpoint serves and a fearsome cross-court forehand.

But, by the time she broke Sabalenka to take a 4-2 lead in the third set, it was clear the 73rd-ranked Fernandez wasn't going anywhere without a fight — an attitude she'll take into Saturday's final against 18-year-old Emma Raducanu of Great Britain.

Her U.S. Open experience so far, she said, "has helped me not only to believe in my game, but it also has helped to open my eyes that I have no limit to my potential," Fernandez said after the match.

As they've done almost from the outset, the fans — some of them decked out in Canadian flags and T-shirts hand-lettered with the name "Leylah" — cheered her like a hometown favourite, an advantage that at times appeared to be getting on Sabalenka's nerves.

Meanwhile, No. 12 seed Felix Auger-Aliassime of Montreal plays No. 2 Daniil Medvedev of Russia in the semifinals on the men's side today.