Three Kelowna divers off to BC Winter Games

3 divers off to Winter Games 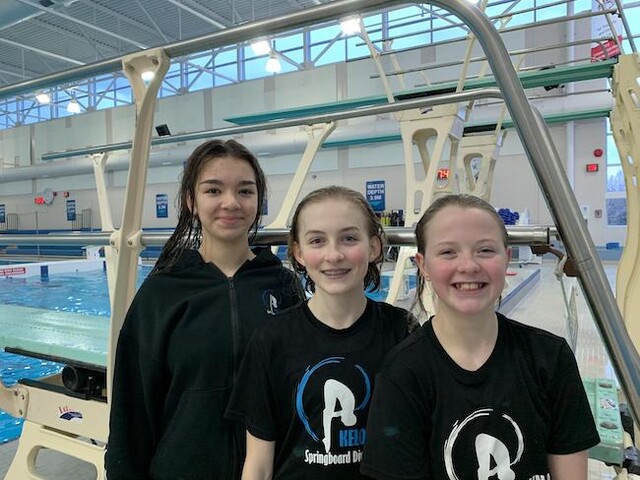 Photo: Christina Unger
Nyah Hedstrom, Addison Anonby and Samantha Vigar are members of the Kelowna Springboard Diving Club who are going to the 2020 BC Winter Games in Fort St. John.

Three young divers from the Kelowna Springboard Diving Club will be heading off to Fort St. John on Wednesday to compete in the BC Winter Games.

Athletes include 14-year-old Nyah Hedstrom, 13-year-old Addison Anonby and 11-year-old Samantha Vigar. For Hedstrom and Anonby, this will be the only chance they get to participate in the BC Winter Games, due to their age.

Hedstrom has a background in gymnastics and has been diving since October 2019, but was forced to take a break in November when she underwent surgery on her elbow.

"Some of the biggest obstacles I have faced was trying to change some of the techniques that I picked up from gymnastics and of course the surgery," said Hedstrom. Despite this, her coach says she came back from surgery with an enormous amount of determination, which has given her the opportunity to participate in the games.

"She put in a lot of work in the beginning with me and then she went out for her surgery, and she came back with just a fire in her heart," said head coach Christina Unger.

Anonby has been diving since 2017, and in 2019, she participated in the Novice Nationals in Kamloops.

"Getting to this point definitely required help from many people — both my coaches as well as my encouraging teammates and family,” said Anonby.

The 2019 Novice Nationals was the first time KSDC participated in such a high-level competition.

"She put in a lot of work and she's pretty fearless, you can tell her to do a lot of things and she'll just do them," said Unger.

The youngest of the group, Vigar, has been diving for one year but started competitively in September 2019.

"My coach introduced the idea of the BC Games in September and I have wanted to go ever since," said Vigar. "I'm at a very young age to be going to [the] BC Games...I have only participated in small events and competitions so this will be a whole new experience for me."

Since moving into competitive diving, Vigar grasped onto the fundamentals very quickly.

"She's had to learn a lot in a very short amount of time and she's done a lot of getting over her fears about the sport because it’s very mental so that's something I really appreciate in her," said Unger.

Throughout the weekend, the girls will participate in a variety of events, including the one metre and three metre springboard events as well as team events.

"I think this is super important for Kelowna because now they're seeing that it can be those smaller clubs that are putting out the high level athletes as well, it's not just big clubs and organizations," said Unger.

"You have these girls showing what they can do and bringing a name to the city and saying 'hey there's good diving in Kelowna.’”