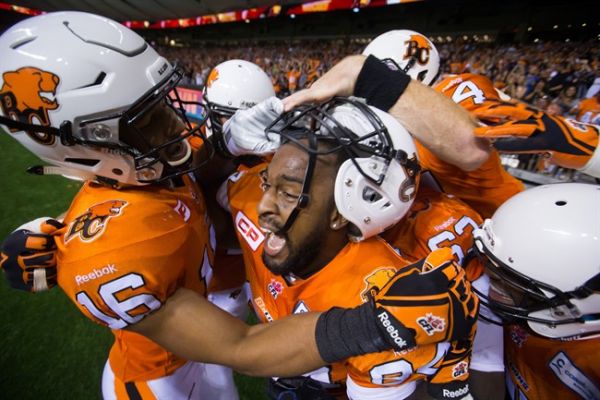 The B.C. Lions' offence woke up just in time.

Travis Lulay threw a four-yard touchdown to Manny Arceneaux in overtime Friday as the Lions picked up their first win of the season with a wild 35-32 comeback victory over the Saskatchewan Roughriders.

"I'm just proud of my guys," said Lulay, who finished 34 of 44 for 404 yards and three touchdowns. "Phenomenal effort to overcome a bit of a slow start."

The Lions (1-1) trailed 29-18 late in the fourth quarter before Lulay hooked up with Austin Collie for a 46-yard touchdown plus a two-point convert with 1:38 to play.

Trailing 29-26, B.C. elected to kick deep and got the ball back after stuffing Saskatchewan on third-and-short near midfield.

Lions rookie kicker Richie Leone then stepped up a few plays later and hit his fifth field goal of the night, a club-record boot of 56 yards, with 15 seconds left on the clock to send the game to overtime.

Former B.C. kicker Paul McCallum, who was cut in training camp, nailed a 33-yard field goal to put Saskatchewan (0-3) up 32-29 in OT before Lulay hooked up with Arceneaux for the clinching points.

"It's a big win for us," said first-year Lions head coach Jeff Tedford, who picked up his first CFL victory. "I know it's only one and it's early, but to be able to come back like that says a lot about our team."

The Lions stumbled in the red zone in a 27-16 road loss to the Ottawa Redblacks to open their season last week and that was the case until the fourth quarter against the Roughriders.

"You could tell it was weighing on the group a little bit," said Lulay. "For us to get over that hump and open up the gate a little bit ... it gives us confidence."

Weston Dressler caught two touchdowns for Saskatchewan, which has lost back-to-back games in overtime and will host the Lions in the rematch next Friday.

Kevin Glenn made his second straight start for the Roughriders after No. 1 quarterback Darian Durant ruptured his left Achillies tendon in Saskatchewan's opener and wound up 23 of 29 for 271 yards to go along with two touchdowns and an interception.

Anthony Allen and short-yardage QB Brett Smith accounted for the Roughriders' other TDs.

Lulay, who also had a touchdown toss to Rollie Lumbala, made his first start at B.C. Place Stadium since September 2013 following two seasons marred by injuries to his throwing shoulder.

"It's important for us to play well at home and defend our turf. It doesn't matter how you do it," said Lulay. "You could sense how important the win was for the guys once we started to give ourselves a little bit of life."

With the Roughriders down 9-7 in the third quarter after Leone connected on a 12-yard field goal, Dressler caught his second TD on a 10-yard pass from Glenn. Saskatchewan went for two, with Dressler hauling in another Glenn pass to go up 15-9.

The Lions responded with a 42-yard field goal from Leone, but Glenn — who started all but one game for the Lions last season with Lulay out injured — drove the Roughriders down to the Lions' one-yard line before Smith rushed for a short TD early in the fourth.

McCallum added his second 32-yard convert of the night to put Saskatchewan up 22-12.

B.C. scored its first TD with under seven minutes to go on a seven-yard pass from Lulay to Lumbala, but Leone missed the convert to keep the Roughriders up by four.

Saskatchewan then looked to have salted things away when Glenn drove the ball down the field again to set up Allen's 10-yard TD run that made it 29-18 after McCallum's convert with just over two minutes to play.

But the Lions didn't quit, as Lulay hooked up with Collie before Leone sent the game to OT.

"We wanted this one bad," said Lulay. "You could feel that and I could sense that. When Richie knocked down the kick we felt really confident going into overtime. I certainly did. I could feel that from the group."