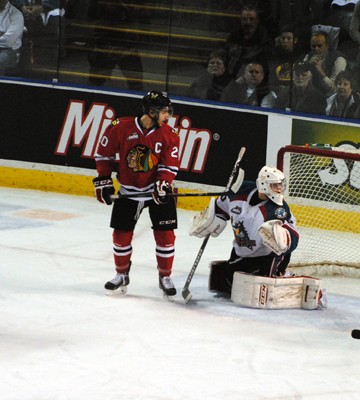 Taylor Leier capped a furious third period comeback with the game winner 10 minutes into overtime giving the Portland Winterhawks a 4-3 win over the Kelowna Rockets and a 2-1 lead in the best-of-seven Western Conference final.

It's the second time in this series the Rockets have squandered a 3-1 lead.

This one wasted a 61 save performance by Jordon Cooke who was spectacular all night long.

"He was fantastic tonight. He was the only reason we had an opportunity to win this game," assistant coach Dan Lambert said during the post game radio show.

Despite being outplayed for most of the final 50 minutes the Rockets held a 3-1 lead late in the third on goals from Riley Stadel (3rd), Cole Martin (1st) and Ryan Olsen (4th).

With 2:59 left and Marek Tvrdon in the box for tripping and goaltender Corbin Boes on the bench for an extra attacker, Oliver Bjorkstrand scored his second of the game and fifth of the series to bring the Hawks to within one.

Brendan Leipsic tied in 1:41 later bringing 9,259 fans to the feet and forcing overtime.

"We had a two goal with just a few minutes left in the game and certainly they kept pressing and we couldn't get our bearings," said Lambert.

"We have to be better defensively. We gave them too much time and space and respect but they were clearly the better team tonight but after 60 minutes we still had a chance to win the game."

The Rockets had some of their best scoring chances of the game in overtime but Boes, who was tested just 33 times, came up big every time.

Portland had a chance earlier in overtime to put the game away when Martin was sent off for holding but the Rockets penalty killers kept the Winterhawks at bay.

The game similar to game two Saturday where the Rockets were unable to match Portland once the Winterhawks ramped up their game.

"I think at this time of year we need to be better. We gave up 65 shots...you just can't give up than many opportunities. It's one thing if they were all from the outside but they had many, many golden opportunities. We have to tighten up defensively."

Game four in the series goes Wednesday night in Portland before the teams travel back to the Okanagan for game five Friday.