Life can be like riding downhill on a mountain bike 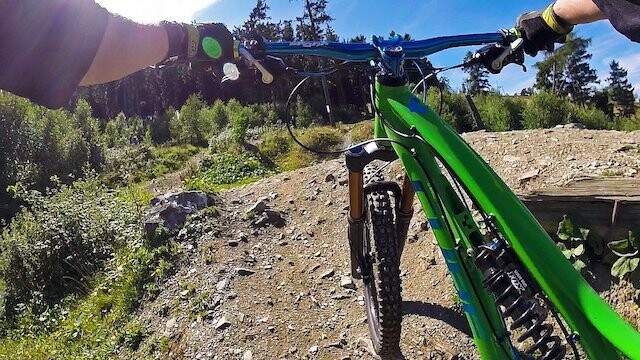 Earlier this spring, a number of my friends and colleagues at the KGH emergency department were meeting up for a day of mountain biking at Smith Creek, a popular bike park in West Kelowna.

Under the promise of “lots of easy trails for beginners”, I loaded up my bike in the pouring rain and headed to the trailhead, wondering what, exactly, I had committed myself to.

I had reasons for concern. Biking is a sport with nearly religious devotion within our department, with many converts sporting new and impressive injuries regularly—bruised shoulders, cut up lower legs and shins and even the occasional broken collar bone or rib fracture. And that’s to say nothing of all the biking injuries we triage and treat on a regular basis.

They have seen what this sport can do, and somehow they are still hungry for more.

I’m relatively comfortable on a bike, and no stranger to winding, narrow rails in the bush, but most of my riding these days tends to be on wide, family friendly trails along Mission Creek, the KVR or the Greenway.

With between 400 and 700 feet of elevation, ramps, drop-offs, ladders and tree bridges, Smith creek was slightly more technical.

From the parking lot, the park opens vertically before you. The long climb up is filled with winding, switchback trails filled with narrow turns, plenty of roots, cobblestones and the occasional boulder.

I quickly found a group of friends who were mostly intermediate or beginner downhill riders and occasionally the towering pines would open before us, offering a panoramic view of Okanagan Lake, a reminder of just how far we had climbed and the promise of the downhill before us.

As we approached the intersection of our downhill trailhead, I heard wild hollering above me. A series of riders flew past, and I watched in amusement as a colleague, usually reserved, calm and cautious at work, came barreling through the trees, his dog chasing close behind him. He launched his bike over the ramp before us, and disappeared into the trees below, his excited yells still echoing behind him.

The beginner riders in our group looked at each other with equal amounts bewilderment, anticipation and trepidation.

“Well, here we are”. And with that short statement of acceptance, we began our descent.

Our first section of the trail was a series of downhill switchbacks. It was also a series of learnings in very quick succession—a (hopefully crashless) crash course on downhill biking.

I learned quickly the danger of the front brake. When traveling at a steep incline, you may not want your front wheel to abruptly stop spinning. Unfortunately, the rear brake is also a hazard, as clamping down on that brake repeatedly caused my back tire to skid, threatening to lay my bike down under me as I leaned into a tight turn. Counterintuitively the greatest control was found with wheels were spinning freely, feathering the brakes rather than gripping them tightly, and committing to the forces of gravity and momentum, rather than fighting against them with each new section.

The terrain was varied and exacting. No distracted riders on this course. After coming out of an especially tricky section, I lost focus for just a moment, hit a series of roots that shook my hands off of the handlebars, and nearly sent me into the embrace of a nearby pine tree.

I began to see the track in these small, segmented sections. A quick visual scan ahead, and an equally quick decision and commitment to the approach of the next 20 meters, the next 10 seconds, the next turn or ramp or landmark. Scan, commit, attempt. Again and again.

When I finally reached the bottom of the trail, I found even my most experienced colleagues relating similar experiences. A particular section that surprised them, even though they had ridden it countless times before. As familiar as the trail was, no rider was ever 100% certain of what lay beyond the next turn.

Have you noticed that there is a connection between uncertainty and wholehearted living? I've found that those who are most alive are never 100% certain of what lies beyond the next turn.

When I became a father for the first time, my wife and I felt the immense, black-hole-like pull to the promise of certainty. We (obviously) had no idea what we were doing, and searched wildly for the best information on how to raise a child.

Seemingly, in answer, everywhere we went we was beset with unsolicited parenting advice—in the line at the grocery store, at gatherings with complete strangers. We soon learned that anyone and everyone had an opinion on how to raise a child, and behind each unsolicited “tip” was the same promise of certainty. Do this, they said (in a hundred different ways), and your child will turn out all right.

But invariably, each pearl of wisdom, would be incompatible with our life, or contradict the advice we had just received from someone else. At night, we read giant tomes of parenting books written by authors with PhDs attached to their names, citing exhaustive research. And then we would read another book, from another author with similar credentials and research, arguing the exact opposite approach to “correct” parenting.

For me, there came a moment of clarity, amidst the confusion. “Oh... no one knows for certain”.

There was still plenty to learn from every book, every article, even from every unwanted piece of advice tossed our way, but soon enough we learned the liberating truth. There is no certainty, no mathematical formula, no answers that always work in parenting. Or any other aspect of our life.

With the lack of certainty, we become like the downhill rider. We get very interested in the road ahead. We scan as much as we can see of the next section, we commit to what seems like our best actions and approaches, and we move forward with equal parts hope and trepidation. And then we do it again, and again.

That uncertain, liminal space is uncomfortable at the best of times, and occasionally agonizing when so much is at stake. But a bit of doubt makes you flexible. Each parenting approach and decision had to be held loosely, always available for scrutiny, to be discussed and adjusted. An approach that worked wonderfully the first time might fall flat the second. What worked with one child would almost never work with another.

Undoubtedly some approaches were better than others. Some constructive and some destructive. Some wise and some foolish. Sometimes we wouldn’t know which is which until much later. Some we still don’t know. So much of it is still in play.

And “play” is the right word here, because whether we are talking about biking, parenting, or any other aspect of our life, we are alive in those moments of uncertainty and curiosity. We are playing with it all, even (and especially) when the stakes are high. We know that there is real danger here, so we pay attention.

We don’t get the security of certainty. But we get something much better. We get to play.