Opening up our world through language 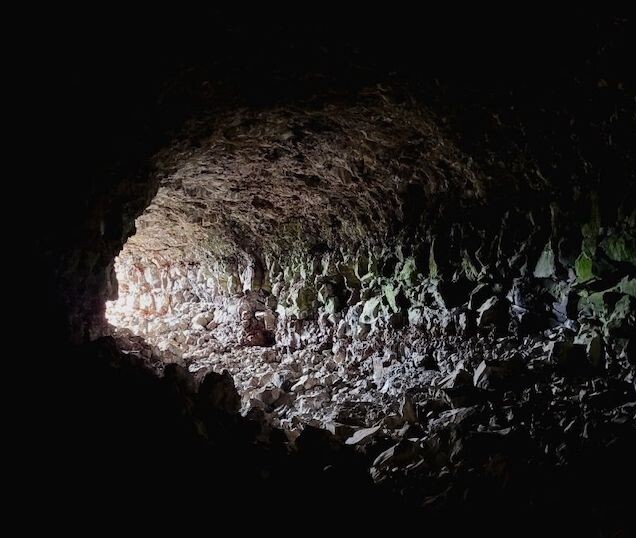 There are nearly 500 explorable caves at Lava Beds National Monument in the U.S. On a recent visit, my family managed to see six of them.

The caves are helpfully divided up into categories based on the caver’s experience and comfort with risk and narrow spaces:

Category A—You can stand and walk fully upright at all times.

Category B—You have to duck your head or bend your body around occasionally low ceilings.

Category C—You will have to crawl or ‘slither’ on your stomach for considerable sections.

Lava Beds National Monument is located just across the Oregon/California border, a National Park of nearly 47,000 acres of rolling hills and desolate plains. On the long winding drive into the park, you can see fields littered with igneous rock from the eruption of nearby Medicine Lake volcano thousands of years ago. Beneath the ground, lava tubes created most of these hidden caverns, including Valentine Cave.

“Valentine Cave is a must see” said the very passionate, uniformed ranger as he handed us a map and our massive, indestructible and un-pocketable flashlights. There was no deposit taken, only our solemn promise to return them at the end of day.

The entrance into Valentine was a short winding path with a handful of switchback stairs leading to its gaping mouth. Immediately the passage splits into two arching tunnels which later join together as the cavern narrows, descending deeper into the earth. You might imagine that the cave’s heart-like shape with bifurcating arching paths and slowly narrowing corridor might be the reason for its naming. But the cave was simply discovered on Valentine's Day in the 1930s, it’s heart like shape completely serendipitous.

Nearly a century later, It certainly had my heart beating faster.

As the corridor continued to turn and descend, the darkness became unfathomably hungry, completely devouring the light of both our dollar store headlamps and the flash of our phones. Only our loaned lanterns were able to shine a thin beam that reached the narrowing walls.

Our family of five walked forward slowly, shoulder to shoulder. Out of necessity we focused one flashlight beam above our heads, and one at the ground directly in front of our feet. The slow uneven drip of water gathered at the end of stalactites, and occasionally would drip onto our outstretched arm or down our neck. In sections the stalactites hung low enough to threaten to comb our hair, or strike a careless forehead. Below our feet the ground was wet, uneven, and littered with piles of rock from where sections of the roof had given way.

The cave walls continued to narrow as we delved deeper still, until the walls beside us were nearly in reach. We stared unseeingly into the distance ahead, and the sloping floor and impenetrable darkness made it appear as if we stood on the edge of a chasm. As if just ahead of us, the ground simply dropped away. Perhaps it did. We never found out. One of our children asked to turn around, and I gratefully conceded to their request.

While each step into the cave had been apprehensive and cautious, our return steps were markedly lighter, buoyed with the security of a known and previously explored path. Soon enough we could see the faint glow of reflected sunlight illuminating the edges of the narrow cave walls.

As we exited the cave, our eyes blinking blindly in the daylight, I breathed in deeply, stretched my arms wide, and sunk into the deep relief of a wide open space.

The whole road trip had been a stretch, a long, slow exhale after months of holding our breath. Despite the hours spent in a cramped minivan, despite the five of us tripping over each other in hotel and motel rooms in different locations each night, it felt expansive, luxurious. It felt wide open, after a long time living in a narrow space.

Along the considerable journey we brought along Brene Brown’s newest (audio)book, “Atlas of the Heart”. I have been a fan of Brene’s research, presentations and writings for a long time now, and this might be my favourite work of her’s yet.

Through mountain passes and desert plains we listened to Brene compare and contrast 87 distinct and common emotions, and the context in which we experience them. The work is thoroughly researched and easy to understand and relate to. But for me, the most interesting aspect of the book remains the ‘why’. Why write a compendium of 87 distinct emotions? Because most can only identify and reach for three— happy, sad and angry.

It doesn’t take long for Brown to argue her case. If we can only identify three emotions, it limits not only our vocabulary, but our experiences as well.

In my last column, I related Jonathan Merrit’s concern that “sacred words” were disappearing from our common vocabulary. His concern is the same as Brown's, that a diminished vocabulary results in a diminished life and that even if we are not religious, we need words like “forgiveness” on our tongues, or we forget the very human need to regularly forgive each other.

The way we think and speak changes us, and our world. Language is not only descriptive, but prescriptive as well.

I think a lot of us have been feeling like we have been living in a narrow space for a while now, corralled into these tight spaces by forces completely beyond our control. A pandemic, a threat of war, a climate emergency, an uncertain economic future.

No one could fault us for feeling lost in this current darkness. For feeling claustrophobic with those walls closing in around us.

In face of this helplessness, Brown and Merrit’s work reminds me that language is agency, for good, or for ill. It is a double edged sword in each of our hands. Inadequate language and poor mental constructs have the potential to close us in just as much as external realities or a physical space. But thoughtful, precise language can open us up, lead us out of darkness and show us realities that we were previously ignorant to.

As the Rabbi Abraham Joshua Heschel famously wrote, “words create worlds”. We have a crucial role in deciding what type of worlds we are creating.

It’s worth asking what language we are listening to, reading and repeating. Are we smaller or larger for it? Are we confining ourselves or freeing ourselves? Are we staying in any narrow spaces that we don’t have to?

The space we find ourselves in is narrow enough. Let’s open it up a little.