Hisses, whistles and clicks—the sound of the magnetosphere

Listening to the solar wind 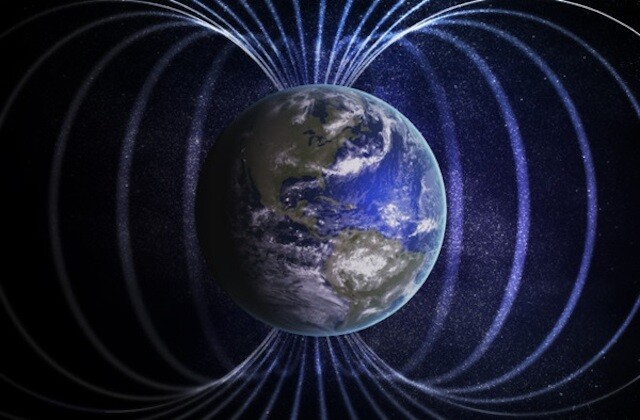 Quite a few years ago now, an ionospheric physicist and I were a long way up a dirt, logging road in Algonquin Park, in Ontario.

The idea was to get a long way from civilization and especially power lines. Finally we found a place where we could safely pull off the road, just in the unlikely case a vehicle happened to come along.

We were out there in the woods to conduct an interesting experiment, to listen to and record the solar wind rubbing on the Earth's magnetic field.

We first deployed the antenna. This was about 35 metres of 10-core electric cable (a cable consisting of 10 individually insulated wires). This we laid down on the ground by the road in the form of a more-or-less circular loop. The wires were connected so the cable formed a large, 10-turn coil. This was to be the antenna.

The receiver used in this experiment was not a radio receiver, it was a simple audio amplifier, similar to what we would use with a microphone and speaker at a concert or public event.

However, this one was battery powered and only produced a strong enough output to listen to by using a pair of headphones, or to connect to a battery-powered tape recorder (remember, this was years ago).

While recording, we could listen to the signals using the speaker in the tape recorder.

By the time we were up and running it was dark. The sky was clear, with countless stars. It is interesting that when we are under a really dark, clear sky, the sky looks grey.

The tall trees on either side of the road were black against the sky. It was a fascinating and magical experience, and would have been more so if we were not most of the time confined to the car because of the mosquitoes.

Unlike most signals studied in radio astronomy, the sounds we were recording were definitely worth listening to. There were long, warbling whistles, rising and falling in pitch. Occasionally there were strange hissing sounds, and lots of clicks.

Under all this was a faint hum, coming from a power line around 60 kilometres away. That's why, to do this experiment, we had to get as far as feasible from people, our appliances and power lines.

The place where the solar wind and our magnetosphere meet is known as the “magnetopause.” Inside it, we are in the Earth's magnetic domain, and on the outside the Sun is in control.

The Earth's magnetic field plays an important role in protecting astronauts in low earth orbit from the effects of the Sun's bad behaviour.

Where the solar wind rubs the magnetopause, it acts on the lines of magnetic force in a similar way to what the bow does to a violin string, or a finger rubbing on glass. It excites waves. These waves move along the magnetic field lines, following them downward into the magnetic polar regions, which include Canada.

Some of those lines of magnetic force passed through our coil of wire, exciting electric currents, which we amplified and recorded. Those waves were at low frequencies, which were audible to the human ear, so all we had to do was capture, amplify and record them.

It is intriguing that some of the most weird and obscure physical processes in astronomy are happening just a few thousand kilometres above the Earth. The same sorts of waves have been detected in Jupiter's magnetosphere by space probes.

• After sunset, Saturn lies low in the southwest, a bit higher than Venus.