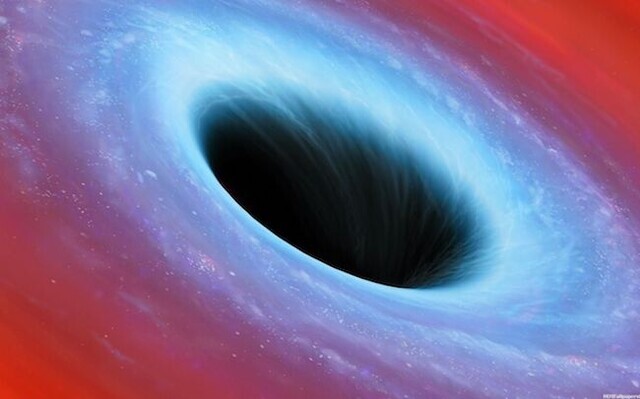 Black holes are rather menacing objects.

Stars, planets, dust and any other material getting too close fall in. There is an intense flash of radiation and nothing comes back out. There are black holes with masses millions of times that of the sun at the centres of galaxies like ours. There are lots of less massive and much smaller black holes around, formed during the final collapse and explosion of dying massive stars.

Astronomers believe there are about 100 million of these scattered around our galaxy. This suggests there could be one or two quite close to us. In fact, one has just been discovered. It lies around 1600 light-years away. That is close. Some of the stars we see in the night sky with our unaided eyes are more distant than that.

This new discovery has not been seen directly; black holes are small and black, invisible against the black background sky. We are forced to use indirect methods in the search. Black holes are probably the most bizarre objects in nature. However, the recipe for making them is simple: a mass of material, gravity, and some initial compression to start the shrinkage.

The strength of the gravity on the surface of a body depends on two things: its mass and its size. For a given mass, the smaller the size the stronger the gravitational force trying to make the body shrink. If we compress something enough, its gravity becomes stronger than the body's ability to resist compression, so it shrinks. As the shrinkage proceeds the gravity gets stronger, and the shrinkage continues.

Our current understanding, derived from observation of other things in the universe and what we can do in the lab does not tell us where this runaway shrinkage will end. At some point in the shrinkage the gravity at the surface of the body becomes so intense that not even light can get out. If this is the case, then how can we find these objects?

One method is to look at the X-ray, light and other radiation given off by material as it spirals in and disappears into the hole. The radio images we have of black holes show a dark, roughly central area surrounded by a glowing ring. This method works when the black hole is consuming nearby stars, planets and other material.

However, there are many black holes that are not "feeding" and not producing observable radiation. These are referred to as "dormant" black holes. In this case we search for stars that are orbiting objects that have the right masses to be black holes but are otherwise invisible.

We see stars in the core of our galaxy in close orbits around the central black hole. By measuring these orbits we can estimate the mass of the object they are orbiting. This works on a smaller scale too. Many stars are members of multiple star systems, with two or more stars born together and staying together, orbiting around each other.

If one star of one of these systems is invisible, perhaps because it has become a black hole, its presence and mass can be determined by analyzing the orbits of its visible siblings. That is how this nearby black hole was discovered.

Astronomers discovered a star that was orbiting around something invisible. After careful observations using different astronomical instruments the unseen object was identified as a black hole. However, there is still a problem. The star orbiting with the black hole is a sun-like star.

It appears that two stars were born together; one was much more massive than the other. The massive one shone very brightly for a few million years and then blew up, ending up as a black hole.

The other star had a mass similar to that of the Sun. Such stars survive for billions of years. It must have been around when the massive star blew up. Since the stars lie close together, about the distance between the Sun and Earth, the sun-like star should have been destroyed.

How it survived the explosion is a major puzzle.

After sunset, Jupiter lies in the south-east and Saturn in the south. Mars rises later. The Moon will reach its first quarter on Nov. 30.