Learning from impacts areas on the Moon

What the craters tell us 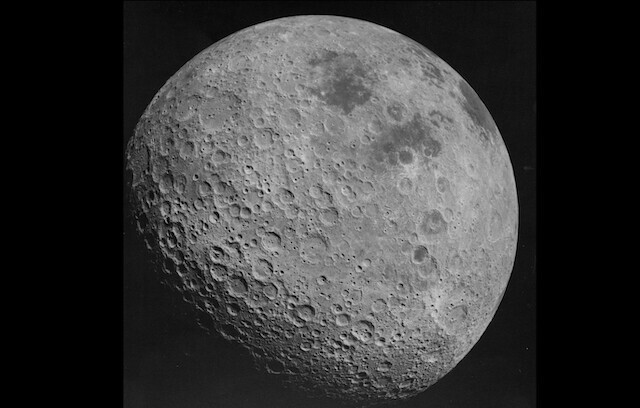 If you look at the Moon through binoculars or a small telescope, two sorts of terrain stand out.

There are lighter-coloured, mountainous regions that are heavily cratered. They are so heavily cratered that it is hard for an incoming object to make a new crater without hitting an existing one.

Surfaces like this are called "saturated". The plains are called "maria" because early astronomers thought the Moon had seas. They have romantic names like Mare Tranquillitatis (Sea of Tranquillity), Mare Procellarum (Sea of Storms), Mare Nubium (Sea of Clouds) Mare Crisium (Sea of Crises) and so on. The maria are not water, but ancient lava flows.

At various points in its history the Moon has been hit by large objects, which blasted huge craters. Lava flowed up to fill the craters and then overflowed onto the surrounding land. We can see craters that are partially buried by this lava. The poetically named "Sinus Iridum" (Bay of Rainbows), is defined by a crescent of mountains that are the rim of a big crater that was buried by the lava forming the Mare Imbrium (Sea of Rains). However, one thing about these lava plains stands out, they are far less heavily cratered than the mountainous areas, suggesting that when the maria formed, the frequency of impacts had decreased a lot.

The Apollo astronauts brought back lots of rock samples from the Moon. Some of them were from the mountainous areas and some were from the lava plains. Using radioisotope dating it was possible to determine when the rocks solidified— in other words, when the rock formed.

The relatively light cratering of the maria indicates that by the time they formed, most of the bombardments that moulded the heavily cratered mountainous terrain happened within half a billion to a billion years after the Moon formed. The bombardment has not stopped and impacts are still happening, but at a far lower rate.

This fits our ideas as to how the Solar System was formed. A collapsing cloud of dust formed lumps. These lumps grew by colliding and sticking together. The biggest lump formed the Sun, and other lumps formed the planets.

As the newly born planets orbited the Sun, they swept up the material sharing their orbits. When the orbits had been "swept clean", the impacts became much less frequent, but did not stop completely. Even today there are objects crossing the Earth and Moon's path around the Sun, many of which pose a collision risk. These orbit-crossing bodies are a continuing threat, because objects in safe orbits continue to be moved into dangerous orbits by the gravitational attraction of the planet Jupiter.

So, by about 3.5 billion years ago, the big bombardment had ended. That was fortunate for us on Earth, because along with the other planets, we were being hit at least as often as the Moon was. The geological record here on Earth suggests that life appeared after the worst of the bombardment was over, and conditions were stable enough for living creatures to survive, proliferate and develop. We don't know if there were any false starts.

In an age of huge telescopes, looking further out into the cosmos and back to the beginning of the universe, it is intriguing that important information on how our world began is written on the face of a familiar object that lights up our night skies.

• After sunset, Jupiter lies in the south-east and Saturn in the south. Mars rises later.

• The Moon will reach its last quarter on Nov.16.