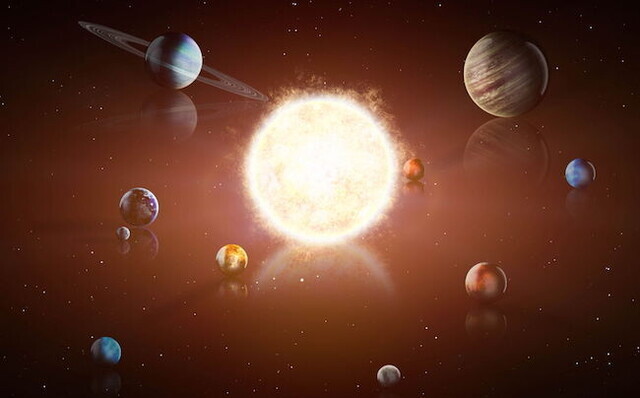 It is widely accepted among the scientific community that over the next few billion years the Sun will swell into a red giant star, absorbing Mercury and Venus, and cauterizing the Earth.

Then the Sun will sneeze off its outer layers, becoming a white dwarf star, which will be so miserly with its energy output that the remnant of the Earth will wind up as an airless, waterless, deep-frozen rock ball. More massive stars collapse and explode. These explosions are so huge that any planets those stars have will almost certainly be melted and then vaporized.

It is therefore really surprising to see planets that were seemingly at point-blank range, and should be dead and gone, but are still there— "zombie” planets.

Around 2,300 light years away lies the pulsar PSR1257+12. This is a neutron star, the remnant of a massive star after it underwent a supernova explosion.

This neutron star is rotating 161 times a second. Spinning at this speed is the result of a big star shrinking into a relatively tiny neutron star. For example, if we shrunk the Sun down to 10 km, a typical neutron star diameter, it would be spinning almost 50 times a second. The star that became PSR1257+12 was bigger than the Sun, leading to a faster-rotating neutron star. The process involved here is what we see when a spinning skater pulls in her arms, making her spin faster.

The rotation rate of something the mass of a star is going to be very stable, which means the timing of the pulses we receive can be precisely timed. In the case of this particular pulsar, the pulse timing varies slightly but measurably, in a cyclic pattern, showing the neutron star has a tiny wobble.

If you have a ball on the end of a piece of string and are whirling it around your head, others would see you wobble, and guess what you are up to, even though they might not be able to see the ball. PSR1257+12's wobble indicates it has three planets orbiting around it.

Getting into the Hallowe'en spirit, the pulsar has been nicknamed "Lich", after an undead creature in western folklore. Moving outwards from Lich, the planets are Draugh (an undead creature from Norse mythology), Poltergeist (a mean-minded spirit who likes to bang doors, knock things over and move furniture), and Phobetor (bringer of nightmares).

Draugh is small, about twice the mass of the Moon. The other two planets have masses about four times the mass of the Earth. What is surprising is how close they are to Lich. Their orbital periods are only 25, 67 and 98 days respectively. In the spirit of the thing, NASA produced a very unusual poster on the subject describing this strange planetary system. It is fun and very informative.

If those planets were orbiting that close when the giant star exploded and turned into a neutron star, they should not exist now.

The explosion should have vaporized them. It would be easy to conclude the observations are wrong. However, since this system was discovered, back in 1991, others have been found.

One theory is that the planets did not exist before the explosion. The star that exploded had a companion star orbiting around it. Such double stars are quite common.

The companion star was destroyed in the explosion. Most of its material was blasted off into space. The planets formed from the remains.

Those planets seem to have temperatures suitable for life, but orbiting close to a neutron star, in an environment loaded with X-rays and other radiation makes it unlikely.

• In the early evening Jupiter lies in the south-east and Saturn in the southern sky. Mars rises later.