Explosion detected in space was creation of a massive black hole

A black hole is born 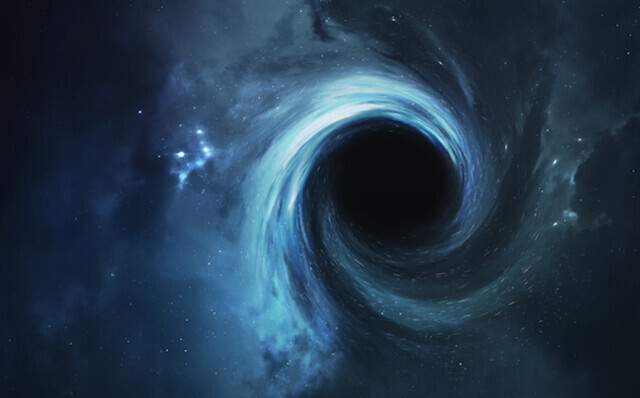 On Oct. 9, orbiting observatories detected the biggest burst of gamma rays we have ever seen.

It was so strong it affected our ionosphere. It came from the beyond the stars of the constellation Sagitta ("The Arrow"). The gamma rays came from an object lying some 2.4 billion light years away.

To account for the strength of the burst when it reached us, the amount of energy involved in producing must have been unimaginably large. Gamma rays are the highest-energy form of electromagnetic waves. To produce them, the energy release had not only to be huge, but also highly concentrated.

The most likely explanation is the birth of a black hole. This involved an ageing star exploding, with its core undergoing unbelievably extreme compression. One way to achieve this is to use an intense, gravitational squeeze, another is compression by strong, explosion-generated shock waves.

The gravity on the surface of a body depends on two things: its mass and its diameter. For example, if we kept the mass of our world as it is and compressed it by some means down to half its current diameter, we would find ourselves four times heavier. So we can boost gravity by compressing a body down to smaller size. This shrinkage is hard to imagine in the case of our planet, but it is something that happens to stars.

Atoms consist of a nucleus containing a collection of protons and neutrons, surrounded by orbiting electrons. However, by far the main ingredient in atoms is empty space. Despite being mostly nothing, atoms strongly resist compression. That is why we can walk on the ground without falling through. However, if we squeeze hard enough, atoms can be forced to shrink.

Stars are formed through the balance of two forces—the gravity due to the material of which they are made pulling inwards and outward pressure maintained by energy production in their cores.

When fuel runs out and energy production slows and then ceases, the outward pressure drops and the stars collapse under their own gravity. As the shrink proceeds the gravitational squeeze increases.

For stars like the Sun, the pressure gets high enough to force its atoms to shrink into their most compact form. Matter in this form is referred to as "degenerate", or more correctly "quantum degenerate". A teaspoonful of this material would weigh a few tonnes.

Stars in this condition are referred to as "white dwarfs". When it becomes one, the Sun will shrink from a diameter of 1.5 million kilometres down to around the diameter of the Earth, around 13,000 km.

More massive stars can impose a far bigger squeeze when they collapse and will also undergo explosions generating inward-moving shock waves that compress their cores so hard the atoms collapse completely, eliminating all that empty space, forming a mass of neutrons. This brings the star down to a few kilometres in diameter, with a teaspoonful weighing around a billion tonnes.

If enough compressive force is available, the story does not end there.

There is a threshold where increasing gravitational force as the star gets smaller overcomes all resistive forces. As far as our current understanding goes, the shrinkage will continue indefinitely, although common sense says that is not really likely.

As the star gets smaller and its surface gravity increases, a point is reached where the stress this force imposes on the fabric of space-time becomes too much. A "bubble" forms around it, called an "event horizon", from which nothing gets out, not even light, hence the term "black hole".

As the material of the star disappears through this horizon, there is a huge explosion as most of that material is turned completely into energy. That is what we believe we witnessed.

• In the early evening, Jupiter lies in the south-east and Saturn in the southern sky. Mars rises later.