Looking at 'sunquakes' and 'starquakes' 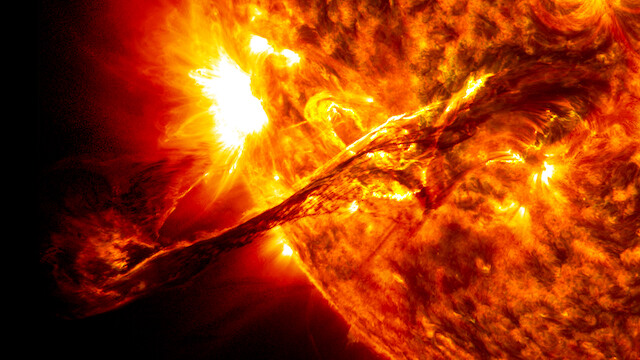 One of the programs at our observatory is monitoring activity on the Sun.

This is done using two small radio telescopes. We do this because many of our activities on the Earth can be greatly affected by what our star, the Sun, is up to.

A few years ago our solar radio telescopes detected a very strong burst of radio emissions. These bursts are produced by solar flares, huge explosions, equivalent to millions of hydrogen bombs.

At the time, we had a piggyback camera system on one of the radio telescopes, so we could watch what the Sun was doing. We saw a great loop of material being blasted into space, and ripples caused by the explosion spreading out across the solar surface, just like the ones we see on the surface of a pond when we throw a rock into the water. We were seeing a “sunquake.”

Here on Earth, releases of stresses in the crust cause waves that move around and through the Earth. We experience those waves as earthquakes. By observing these waves after they have passed through the body of our planet, we can work out what our planet is like inside.

Large earthquakes make the Earth ring like a gong. From the way the gong rings we can determine the large-scale structure of the planet. We can do the same thing for the Sun, to see what's inside.

Unlike the Earth, the Sun is not solid. It is a big ball of plasma—extremely hot gas—threaded by intense magnetic fields. There is a huge fusion reactor in the core, producing the energy that makes the Sun shine. The magnetic fields and plasma combine to form a substance rather like rubber. It can be stretched, twisted and compressed, storing energy, and it can flow. The violence of the energy production processes in the middle, flare explosions, stress releases and other explosions in and on the surface of the Sun launch waves that pass through the body of the star, making it too ring like a gong.

We see the effect of this ringing as patterns of waves on the surface. These patterns tell us about the ringing taking place inside, and from that we can determine what the interior of our star is like.

We believe the Sun is a typical star. In this case other stars should have tremors, shocks and explosions happening on them, so they too should have seismic activity—starquakes—and ringing like a gong because of them.

However, all stars other than the Sun appear through our telescopes as tiny points of light. There is no way we can directly see waves on their surfaces as we can for the Sun. Fortunately, that ringing causes stars to change very slightly in brightness.

Also, fortunately, we have, for many years, been making measurements of tiny brightness changes in thousands of stars. If one of a star's planets passes between the star and us, the starlight dims very slightly. So far thousands of planets orbiting other stars have been found in this way.

It is early days yet, but a fascinating discovery has been made for the star Altair.

Our ideas as to how stars work suggested this star is about a billion years old. The Sun was born 4.5 billion years ago. The seismic studies of Altair show what the star is like inside, which reveals it is much younger, only around a hundred million years old. This means that if there is life on any of its planets, it will be at its very beginning, and won't think of invading us for a long time yet.

The movie "Forbidden Planet" is definitely fiction. It's still worth seeing.

• Mercury lies low in the east before dawn. In the early evening Jupiter lies in the east and Saturn in the southeast.

•The Moon will reach it last quarter on Oct. 17.