A new look at Neptune 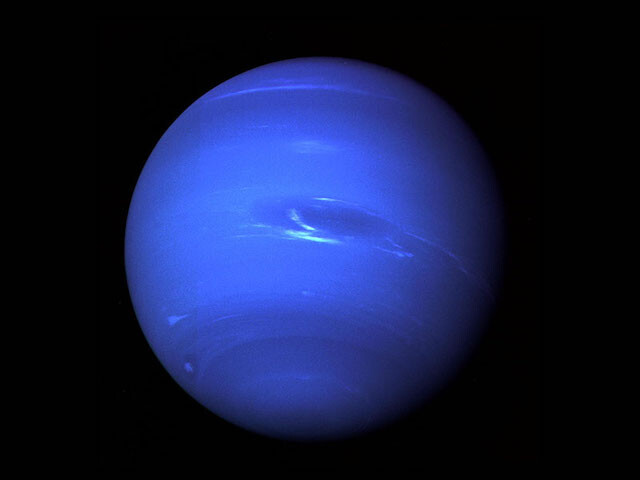 When the James Webb Space Telescope was launched, we all had great expectations as to what the telescope would show us. The instrument is living up to those expectations, and more.

The images of distant galaxies and star forming regions in our galaxy are beautiful and scientifically exciting. The JWST will play a very big role in the search for Earth-like planets orbiting other stars, and will help us find out whether we are alone. However, one of the most fascinating images so far is something much more local, actually in our cosmic backyard. It is of the planet Neptune.

Neptune is the eighth planet out from the Sun. It lies 30 times further from the Sun than the Earth, and therefore receives only about 1/900 the amount of sunlight and heat. It is cold out there.

The planet has a diameter of almost 50,000 km, compared with the Earth's 12,756 km. Although it has almost 60 times the Earth's volume, its mass is only 17 times that of the Earth. This means it cannot be a huge rock ball. One cubic centimetre of its material on average weighs in at only 1.6 grams.

For the Earth that quantity is about 5.5 grams. Neptune, like Jupiter, Saturn and Uranus, is mostly gas, with a solid body of some kind in the middle.

Its atmosphere is mainly hydrogen and helium, with traces of methane, which gives the planet its blue colour. Jupiter and Saturn look beige through telescopes because their atmospheres are loaded with ammonia and complex hydrocarbons. Neptune is colder, and those materials have frozen out.

The flyby of the Voyager 2 spacecraft showed Neptune to be surrounded by a thin ring or two, and that despite being so far from the Sun, there is enough energy to drive weather, with clouds and strong winds. However, the images provided by the JWST showed a better and more scientifically fascinating view than we have ever had before. The camera is sensitive to the red and infrared end of the spectrum, and much less sensitive to blue. This works out well here because the bright, blue disc is much dimmer in the image, allowing the fainter things around the planet to stand out.

The image shows a bluish disc with lots of clouds, probably of frozen methane. These are concentrated in belts because of the planet's rapid rotation. A day on Neptune is about two thirds of the length of a day on Earth, despite the planet's larger diameter. The thin rings shown in the Voyager images are unmissable. There are two well-defined rings, and extending outwards from the inner ring is a fainter belt of dust. We can also see seven of Neptune's collection of fourteen known moons. There are probably more still to be discovered: mostly very small ones.

The James Webb Space Telescope will play a role in investigating planets that orbit other stars—exoplanets. It is likely that many of them resemble those in our Solar System. They may be rock balls, like Mercury, Venus, Earth and Mars, gas giants, like Jupiter and Saturn or ice giants, like Uranus and Neptune.

Some of the exoplanets discovered so far are nothing like any in our Solar System, but even so, the ones we are in a position to get a close look at will help us understand what we see orbiting other stars.

Even with the best Earth- or space-based telescopes, those exoplanets appear as just dimmings in the light of stars. From that we can glean the size of those worlds, how close they are to their suns and something of what their atmospheres are made of.

Building this information into a picture builds on what we see in our own Solar System.

The JWST is turning out to be a powerful tool in answering the questions that are deep down inside all of us—are there planets like ours out there and are we alone?

• Mercury lies low in the east before dawn. In the early evening Jupiter lies in the east and Saturn in the southeast.