Large asteroids are a danger to earth 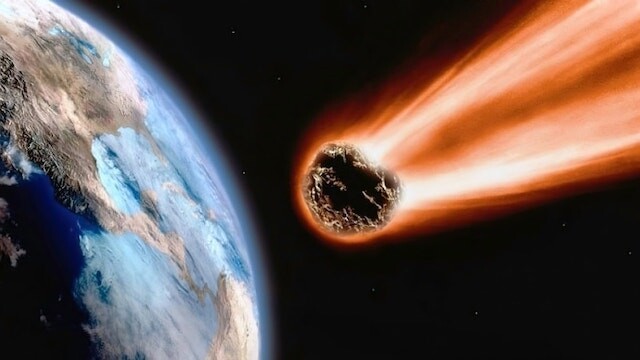 At 07:17 local time on June 30, 1908, something entered the atmosphere over Tungusca, Siberia and exploded.

The blast, equivalent to about 17 million tonnes of TNT, flattened around 80 million trees over an area of more than two thousand-square-kilometres. The body is suspected to have been a small asteroid, with a diameter of around 50 metres or maybe a small comet.

If it had arrived a few hours later, it would have exploded over Europe, with devastating results.

Sixty-five million years ago, at the end of the Cretaceous period, ammonites, creatures related to the modern nautilus, filled the seas, and dinosaurs ruled the land. Both had ruled the planet for hundreds of millions of years and were in decline, probably due to increased volcanism and environmental change.

The coup de grace was provided by an asteroid between 10 and 15 kilometres across, which crashed down in the Gulf of Mexico. Soon after, the dinosaurs, ammonites, together with about 75% of living species, were gone. Mammals survived, leading to our presence on Planet Earth today.

The Barringer Crater in Arizona, and others around the world, show our planet has been hit many times throughout its history. Actually, erosion and plate tectonics have erased most traces of cosmic impacts.

A better understanding comes from having a telescopic look at the Moon. There has been little erasure of impact craters there, showing the countless number of times the Moon has been hit. Almost certainly, we have been hit at least as many times. The main process by which lunar craters disappear is obliteration by impacts and being overwritten by new craters.

Today, with our planet on the verge of not being able to provide the requirements of life for us and the species with which we share the world, the last thing we want is to be hit by an asteroid, even a small one. What can we do to minimize the chance of this happening?

The first task is to identify potentially threatening bodies. Since many asteroids are dark grey or even black, and we are looking for them against a black sky, this is not easy. Telescopes with high-sensitivity imagers are now dedicated to asteroid spotting, and they are getting better and better.

The key thing is to spot the threats early enough to do something to mitigate them.

How can we deal with something that big, because at some point we are likely to have to? Doing what they do in the movies, which is blowing up the asteroid, would turn a single impact into a shotgun blast of impacts. A five-kilometre asteroid can be broken into a lot of large and very dangerous fragments.

The solution getting most attention is to change the orbit of the object so that it does no hit us.

The most powerful rocket motors we have would take weeks or months to deflect a threatening object. In addition, those rocket motors can only be fired for a few minutes. A low-thrust engine that can run for months or years, preferably using the asteroid as fuel is feasible.

However, this means we have to identify the threats years in advance. Once we have done so, it will take months or even years to get to the asteroid to install the engine. Predictions that far in advance are not easy, because asteroid orbits are being constantly perturbed by the gravitational pulls of giant planets such as Jupiter.

However, we have a strong incentive to solve this problem.

• Saturn and Jupiter are in the sky after sunset. Mars rises three hours later followed, deep in the dawn glow, by Venus.

• The Moon will reach its last quarter on Sept. 17